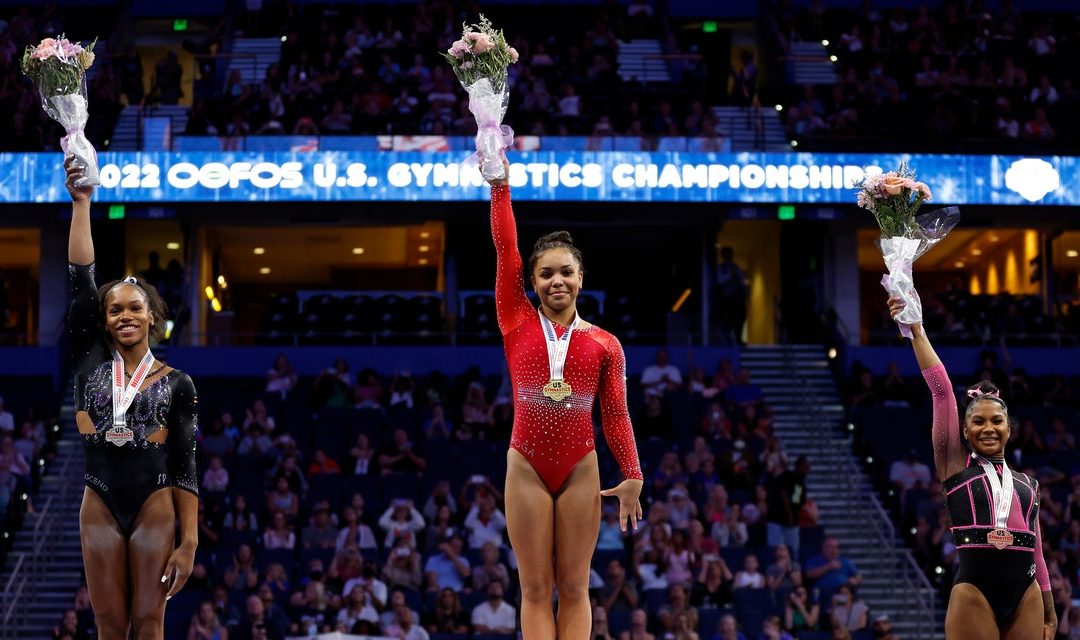 It was a history-making night at the 2022 US Gymnastics Championships on August 21: For the first time ever, three Black gymnasts made it to the all-around podium during the national competition, according to Team USA.

The makeup of the podium follows a trend building upon last year’s results: At the 2021 US Championships, all three athletes on the podium were women of color, with gymnastics great Simone Biles finishing first, Sunisa Lee—who later that year became the first Asian American to win all-around Olympic gold—earning second, and Chiles coming in third.

This year’s history-making podium has important implications for the sport of gymnastics as a whole, which traditionally has been predominantly white. According to NCAA data, in 2021, only 9% of Division I athletes on women’s college gymnastics teams self-identified as Black. And the diversity problem has been perhaps even more striking on the sport’s biggest stage: Team USA hadn’t had a Black gymnast compete on its women’s Olympic team until 1992, when Dominique Dawes and Betty Okino earned their spots on the roster, according to The Washington Post.

Within the last decade or so, though, there has been some progress. On the college level, the number of non-white athletes has grown, up from 27% in 2012 to 37% in 2021, according to the NCAA data. Still, it’s worth noting that the number of Black athletes has only increased two percentage points since 2012.

At the Olympic level, Black gymnasts have now earned the highest honors in the sport. At the 2012 Olympic Games in London, Gabby Douglas claimed the all-around title, making her the first Black gymnast to do so—a feat which Okino said “changed the trajectory forever,” according to the Post. Then the following Games, Biles began her dominance on the Olympic stage, capturing her first of seven Olympic medals.

The victories of Black athletes have given a new generation of Black girls role models as well, potentially encouraging them to give the sport a try.

“It’s pretty cool that kids will look at us, just the way we looked at Simone, and say, ‘Yeah, if she can do this, maybe we can do this, too,’” Chiles said to the New York Times before the Tokyo Games last summer. “Representation matters, you know.”