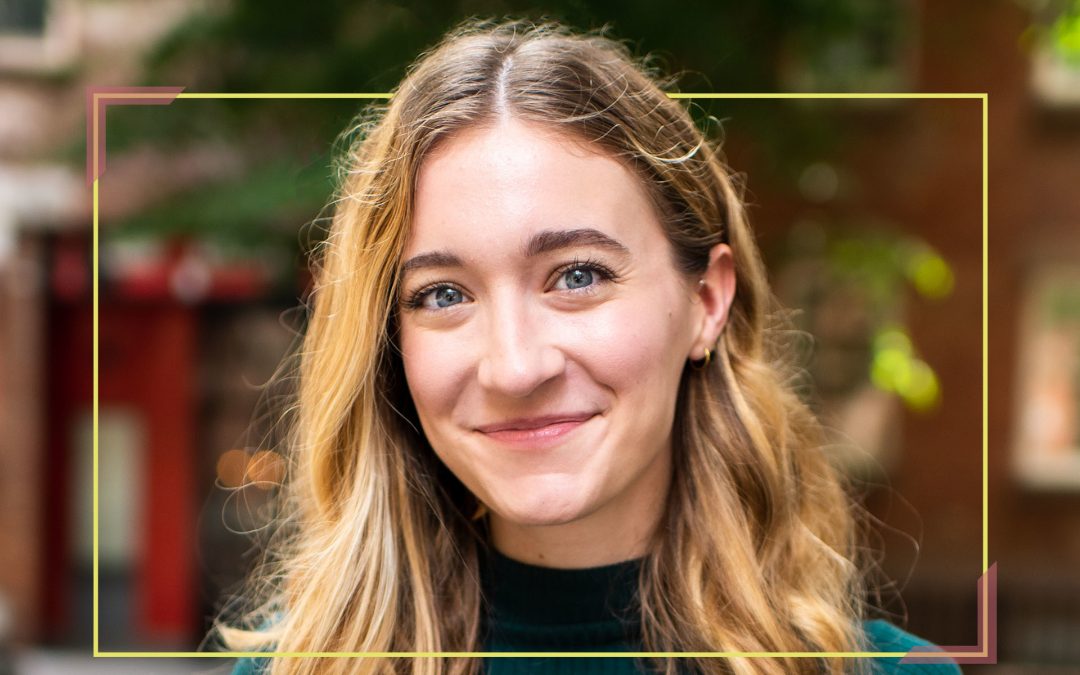 While some health issues are visible to the outside world, many people face chronic conditions that don’t have externally visible signs or symptoms—also known as invisible illnesses. In mindbodygreen’s series, we’re giving individuals with invisible illnesses a platform to share their personal experiences. Our hope is their stories will shed light on these conditions and offer solidarity to others facing similar situations.

My sophomore year of college, I started getting uncomfortable vaginal symptoms for the first time in my life. For me, that meant itchiness and pain with sex. Before that, I had honestly never really thought about my vaginal health, outside of maybe my menstrual health—and it certainly wasn’t covered in my high school sex ed class. Needless to say, I felt pretty unprepared.

So I did what so many other people do in that situation: I assumed I had a yeast infection. I drove to the pharmacy and got some over-the-counter medication, hoping that would help. For many people, that works just fine—but for me, the symptoms just kept coming back.

My infections started taking over my life.

I finally dragged myself to the college health center complaining of yeast infections, and I got some prescription medication. But I experienced the same issue over and over again: Sometimes it would go away, and then it would just keep coming back. I found myself in this nonstop cycle of going to the health center every few weeks. And it’s not like I was just going in for a routine exam—it felt very intimate and embarrassing to get a pelvic exam every few weeks. I mean, nobody wants to be in the stirrups more than they have to. It was really disrupting my life, not just from the visits, but it also started to take a toll on my self-confidence.

After months of return visits, I started to become my own advocate, and shared I really didn’t think the medication was working. Then I was put on a longer-term course of antifungals (a weekly Fluconazole pill for six months). It did work in a sense, the symptoms briefly went away—but then a couple years later, the same cycle started all over again.

I was put on another six-month course of antifungal therapy, but then I started getting an allergic reaction (swelling, hives, the works). As it turned out, I’d developed an allergy to the antifungal. However, at the time, I was so desperate for the vaginal symptoms to go away, sometimes I’d still take the medication and hope that maybe (maybe!) the reaction wouldn’t be as bad as the last time. But it always was. My doctors eventually switched me to another medication, but the recurrent cycle still continued.

This whole experience went on for five years—through college, through grad school, and my move to New York.

Years later, I finally had an accurate diagnosis.

In my new city, I found a new gynecologist, who I informed about my recurrent yeast infections (which I was, unsurprisingly, experiencing at the time of that first visit). After our exam, she told me plainly: this is bacterial vaginosis. I’d been struggling with these symptoms for five years, and I had never heard of bacterial vaginosis (BV).

During that visit, I learned BV is the most common vaginal infection in women of reproductive age, affecting more than 21 million per year. I was shocked. I realized that for five years of my life I’d been on medication that was treating a condition I didn’t have. While I probably had a yeast infection at some point, I never had the language to describe my symptoms in a way that could have evolved my care over time.

As it turns out, when you actually know your condition, it’s way easier to get better (shocking, I know). BV is an overgrowth of disruptive bacteria, so it’s treated with antibiotics—whereas a yeast infection is treated with antifungals. Once I started taking the correct medication, I finally felt my symptoms subside—which it turns out still puts me in the “lucky” group, given that up to 80% of BV cases recur within 3 months of treatment.

Another way my course of treatment changed, however, was my pattern of behavior. In other words, I stopped self-diagnosing and assuming everything was a yeast infection. (One study that I’ve since read found that 69% of participants who thought they had a yeast infection actually had something else.)

Of course, many people do in fact get recurrent yeast infections—and that’s important to be aware of, as well. Ultimately, I think it’s crucial to educate yourself about the potential options, and also be acutely aware of your own body.

There’s another important symptom that I want to highlight about my experience: the anxiety that can come along with having recurrent vaginal symptoms. Suddenly, you’re not at home in your own body. Every little itch or tingle or any kind of symptom can send you spiraling and questioning if it’s happening again.

Even when my symptoms went away, some of the anxiety did not immediately disappear. There was this haunting feeling that everything in my life could somehow trigger an infection—eating sugar, drinking alcohol, caffeine, sex, etc.

For me, I found that vaginal health was mental health. That’s why I think it’s so important to help destigmatize vaginal health, and one of the biggest ways to do that is by sharing our experiences.

My experience inspired me to help others better understand their vaginal health.

Three years after my BV diagnosis, my friend Priyanka approached me with this idea of creating a vaginal microbiome test. I distinctly remember her sitting me down and saying: did you know that vaginal infections are poorly understood, regularly mistreated, and often have high rates of recurrence? At the time, she had no idea about my health journey, or how much this topic resonated with me. Needless to say, I was so excited to hear about her idea, and I couldn’t wait to get on board. From there, our company Evvy was born.

While it started as an at-home vaginal microbiome testing and care offering, Evvy soon evolved into an educational and destigmatization platform as well. Between the information we provide on the website and our social media presence, our goal is to help people become better health advocates for themselves, by providing the language they need to participate in their healthcare decision making. What’s more, we want to help destigmatize and demystify vaginal health, let people know they aren’t alone, and show there’s nothing to be ashamed of when it comes to vaginas.

Some misconceptions we need to ditch.

There are so many misconceptions and stigmas when it comes to vaginal health and infections, but here are a few I’d love to highlight:

People with vaginas are told so often—from companies, people with penises, or pop culture—that vaginas should not smell at all. Or even worse, they should smell like flowers or fruit. I think it’s important to clarify that vaginas should smell like a body part. And if there’s a fishy odor (which is the ultimate shamed smell), that could be a symptom of a medical condition or an imbalance in the vaginal microbiome.

Another stigma that I’d love to break is the idea that if you suffer from recurrent infections, you are somehow dirty, less than, or there’s something broken about your vagina. Let me be clear: These are literally just medical conditions. There’s nothing wrong with you. And there are ways you can fix it and get help from a medical professional.

While pain with sex may be common, that doesn’t mean it should be normal. It could be due to a pelvic floor issue, but it also could be an undiagnosed infection.

Discharge is a healthy, common part of your menstrual cycle. Your discharge will get thinner and clearer during parts of your cycle, whiter during other parts, it might be slightly yellow before your period, the list goes on. I’ve found that so many women don’t know the cycle of their discharge, so when there’s abnormal changes, it’s even harder to detect.

Again, this all comes down to knowing what’s “normal” for your body, so you can notice when something is off.

My biggest piece of advice.

The most important thing I hope people take away from my story is to be your own advocate. Don’t wait for somebody to educate you, lean in and educate yourself. Find resources and people that can help you along the way, which could include reputable online information and an empathetic provider or doctor.

If you’re struggling with feeling isolated or embarrassed, community groups on social media can be so helpful. There are so many groups made up of women and people with vaginas who have banded together to share knowledge. Evvy is also doing a lot of work in this space, whether it’s sharing information on our site or creating fun TikTok videos to destigmatize vaginal health.

Please don’t let yourself feel like you’re alone, because you’re not, and there are amazing communities and people trying to change the conversation on this topic and educate the world.

As told to Kristine Thomason.

You are now subscribed

Be on the lookout for a welcome email in your inbox!