Kombu: The Magical Seaweed to Cure Your Health Problems 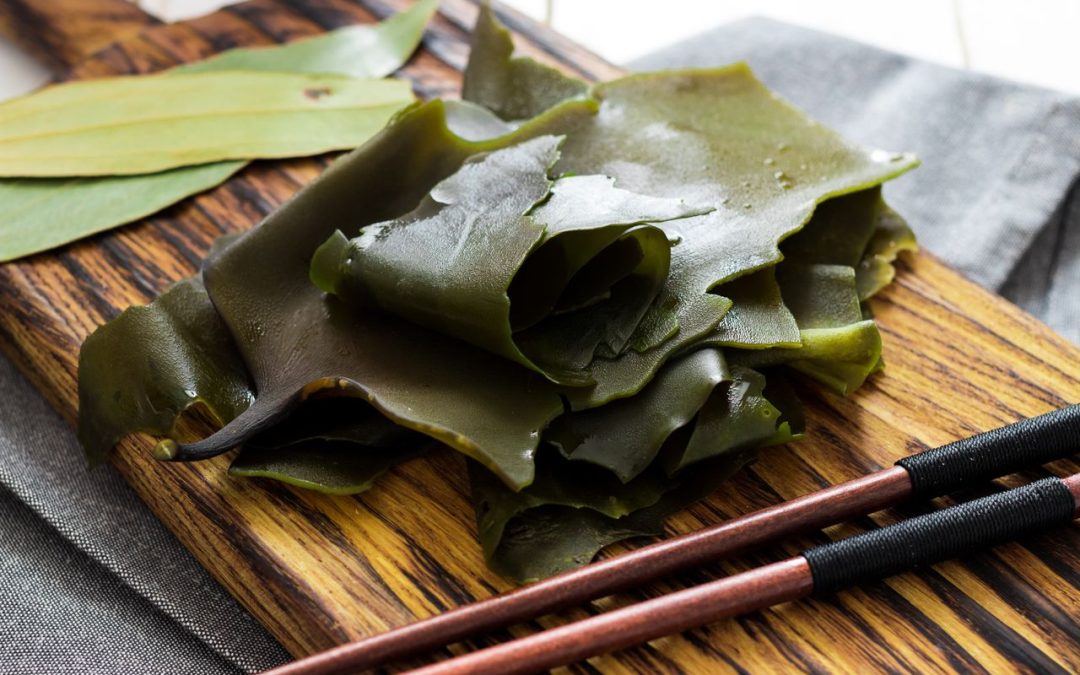 Kombu is a type of seaweed (kelp) that etymologically originated in Japan but is prevalent in most Asian Countries. It is edible and included in several diets across the world. The Japanese diet has included Kombu for almost 1500 years.

Kombu belongs to the brown seaweed family, yet we cannot restrict the type to this only. There are several types of Kombu available; they differ in taste. The most popular recipe using Kombu is a soup named Dashi.

When used in dishes, Kombu acts as a natural flavouring. It is an ingredient in savoury dishes and gives the dish an “Umami” taste. Umami is one of the five basic tastes, described as a savoury, meaty deliciousness. Owing to its constituents, Kombu is known to grant several health benefits.

These are the four primary widely used forms

According to the USDA, 100g of Kombu possesses the following nutritional properties.

Kombu is known to possess extremely high contents of micronutrients like iodine. As iodine is vital for development and growth, Kombu is a good source. But, consuming large amounts of Kombu will lead to increased Iodine levels in the body, which can cause severe disorders. Thus, one should consume it in appropriate quantities. Besides Iodine and Sodium, Kombu also contains several vitamins like vitamin C, A, vitamin K, B5, etc. These can contribute significantly to the daily intake value.

Kombu contains a reasonable amount of protein, which can help you meet your daily protein requirements. In addition, it has minimal fats, making it healthy for weight management. Although Kombu mainly contains carbohydrates, these carbohydrates would not make you gain weight. Therefore, it is suitable for most weight loss plans.

Owing to the constituents mentioned above, Kombu possesses several health benefits. Although, active research with complete evidence can substantiate whether seaweed can benefit your body. With seaweed, the process of manufacturing the product is tedious. Hence, the health benefits are not entirely clear. More human-based studies are required to confirm these benefits. Even then, some health benefits observed by the people who consume Kombu regularly are listed below.

Kombu contains a good amount of vitamin K, contributing to the daily intake value. Vitamin K aids in the blood coagulation or clotting process. Therefore, it can eventually improve blood quality. Vitamin K can also impact calcium in the body and boost your bones’ strength.

Kombu contains glutamic acid- alpha-amino acid. This amino acid acts as a precursor or a pioneer of protein synthesis in the ribosomes. Thus, it is of great importance to the body. Also, this amino acid is what gives the Umami taste to Kombu. Additionally, glutamic acid helps break down the carbohydrates in beans. Also, this helps to prevent gas formation.

Iodine in Kombu can Prevent Anaemia.

Kombu contains exceptionally high levels of iodine that aid in producing thyroid hormones. These thyroid hormones help the body’s overall development, especially during pregnancy and lactation. They also aid in the development of the nervous system of the body. Iodine may also prevent some forms of cancer and increase the life span, especially in males. In addition, studies show that hypothyroidism gets cured with Kombu. The deficiency of iodine can cause hypothyroidism, whereas an excess of iodine may cause hyperthyroidism.

Kombu contains a good amount of potassium as well. This potassium helps maintain the blood pressure level and improves the quality of the blood. Also, potassium helps in muscle formation. It also regulates the nervous system of the body.

By observing the USDA research, we can conclude that a serving of Kombu does not contain fats. Hence, one can use it in keto or other diets to help lose weight. Nevertheless, you must be cautious of choosing the recipe as the recipe may contain variable amounts of fats.

Since Kombu is a popular food in Japan, you can witness these benefits in most Japanese populations. In addition, most studies show that certain sections of the Japanese population experience well-developed bones and increased lifespan and other distinguishing features compared to other countries due to the regular consumption of Kombu (seaweed) which contains high amounts of iodine.

Ways to Use Kombu

There are several ways to use Kombu, especially in various dishes. A few of them are listed below.

It is the most widely popular dish that contains maximum kombu content. Also, it adds umami flavour to most of the soups.

It is wise to include Kombu in bean dishes as they usually cause gas. Kombu prevents gas formation due to the presence of glutamic acid. Thus you can include it in every bean dish.

This tea is popular in the United States and Japan. Kombu and hot water are combined to make this delicious tea. The Kombu dissolves and provides a unique flavour, making it a refreshing drink.

Kombu goes well as a seasoning in rice. This rice makes sushi. Most popular Japanese dishes contain Kombu as a vital ingredient.

Kombu is a type of dried kelp famous in Japanese, Korean and Chinese cuisine. Contrary to popular belief, Kombu Dashi is a popular soup stock and is a vegetarian soup. It is a fantastic ingredient to include in a vegetarian or vegan diet. It has a high content of glutamic acid, magnesium, vitamins, fibre, iodine, and much more.

There are many Japanese recipes involving Kombu. But the most prominent one is Kombu Dashi. Think about Kombu; Kombu Dashi is the only dish that pops up in our minds. It has two types, cold brew and hot boiling water. It is the easiest dish to make. One can use this to prepare several kombu dishes, especially miso soup. Here we bring you the recipe of the same.

Enjoy the Dashi by including it in Vegetable Miso Soup.

The regulations of using Kombu are related to the amount of iodine your body can take.

Though Kombu has several benefits, it may cause allergies in specific individuals. A few of these allergies are:

According to research, the high iodine content in Kombu can cause severe rashes in specific individuals. It is not wise to consume high quantities of Iodine as Iodine can even interact with several medications and excessive amounts of Iodine content in your body. Excess iodine can lead to fever, nausea, diarrhoea, low bp, and pulse. So consult your doctor before involving in a full-fledged kombu-based diet. Kombu is not the same for every person. It differs with different individuals. Thus, only a physician can guide you on whether you can consume it or not.

This allergy is not limited to only Kombu; it is typical for all seaweeds. It is not necessary that if you are allergic to seafood, you would be allergic to seaweed as seaweeds do not contain fish protein. Even then, it is wise to opt for a doctor consultation before consuming seaweed as it may lead to an allergic reaction if started abruptly.

Kombu has specific adverse effects on our body concerning its Iodine content. A few of these are below. However, most of these effects are due to Iodine Toxicity.

Excess to iodine can lead to several severe effects on our body. One main effect is the abdominal pain caused due to interference of the iodine in the kidney mechanism. In addition, the micturition and filtration steps do not finish effectively; hence the patient might experience abdominal pain. Hence you may even experience dehydration.

Excess iodine can lead to a metallic taste in your mouth. Also, this may lead to a nauseous feeling all the time. In addition, you may experience vomiting too.

Excess iodine may not be digested well in the body and may cause digestive issues like diarrhoea and feverish symptoms. If this fever does not get treated at an appropriate time, it may lead to wheezing and breathing issues.

Excess iodine can directly affect the thyroid gland and can lead to several issues like goitre and autoimmune iodine diseases.

From all the points mentioned above, it is apparent that Kombu is an entire package of nutrients. Although there is not much evidence supporting it, people in Japan have been using it for decades. Studies have observed that the overall life span and cancer prevention rate have been high in Japanese populations as they include all kinds of seaweeds in their diet. Even then, it is better to consult a doctor before including Kombu as it contains high amounts of iodine, which can pose a risk to some of us.

A. No, Kombu is not toxic on its own. However, it contains high amounts of iodine, which can prove to be a toxic factor if consumed in higher quantities. Therefore, before consuming any seaweed, look out for the iodine content, as most seaweeds are high in iodine. This iodine is a boon and a bane at the same time. So choose wisely and then opt for Kombu.

A. No, Kombu is not at all cancerous. It is known to prevent certain cancers. Although this research is still at the animal testing level, more work on humans will give clarity. Most seaweeds are known to prevent cancer. Kombu is the staple food of Japan which explains the lower cancer rate.

Q. Is it safe to eat Kombu?

A. Yes, Kombu is entirely safe to consume. You can easily include Kombu in your diet without any fear. The only limitation is that it is better not to consume raw or fresh kombu sheets as they contain even more iodine. Thus, you can opt for processed and dried Kombu. Kombu tastes best when used in the form of Dashi in soups.

A. Yes, Kombu is known to reduce gas, especially in beans. Usually, cooking beans and eating them raw can cause gas formation. To avoid that, add a bit of Kombu to your beans and cook them. The glutamic acid in Kombu breaks down the sugars, reducing the gas in your body.

Q. Does Kombu help with digestion?

A. Yes, Kombu helps in simplifying the process of digestion as it contains fibre. This fibre aids digestion and assimilation and smoothes the rectum for regular bowel movements. Thus, you can include them regularly in your body. But be cautious not to increase the prescribed quantity as it can backfire on the treatment.

A. Kombu does contain reasonable amounts of fibre which can aid in satisfying your appetite, but there is not much evidence to support the theory of weight loss when it comes to Kombu. You will need to follow a strict diet and then include Kombu in the diet to ensure the burning of fat.

Q. Is Kombu good for the thyroid?

A. Yes, Kombu is good for the thyroid as it contains high amounts of iodine. Kombu has the highest iodine content when it comes to seaweeds. Therefore, including appropriate quantities of Kombu in your daily diet can help you cope with thyroid-related issues. But be careful as high consumption may lead to hyperthyroidism and cause other thyroid-related problems.

Q. Is Kombu good for hypothyroid?

Q. What are the benefits of Kombu?

A. Kombu is a natural flavouring substance mostly used in savoury dishes due to its umami taste. It contains reasonable amounts of iodine, Vitamin A, Vitamin K, and Vitamin C that can benefit your body if consumed regularly in appropriate quantities.

Q.Does kombu have too much iodine?

A. Yes, Kombu is the seaweed with the greatest iodine concentration. That is why one must lower the quantities of Kombu in daily consumption, as excess iodine can lead to dire consequences in the body.

A. If you look at the broader perspective, the Kombu is highly beneficial for your body owing to its contents. But excess of everything is bad. Therefore, it is advised not to exceed the average quantity of kombu consumption as it may lead to irreversible disorders. Otherwise, you can consume Kombu according to the regulations and after consulting a doctor.