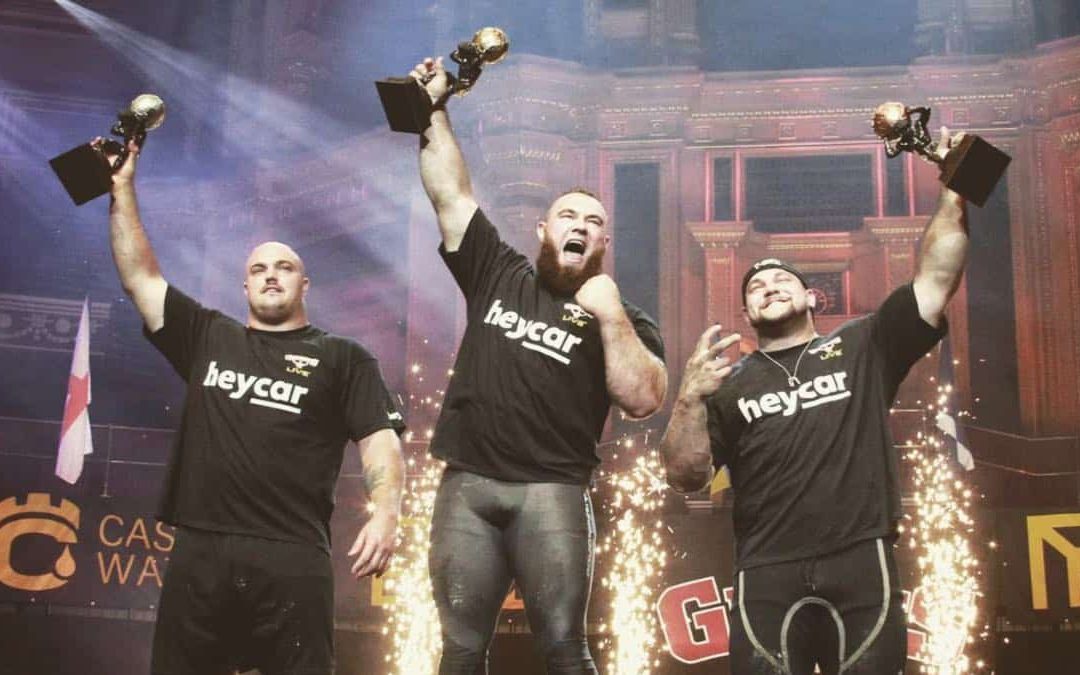 Oleksii Novikov is the champion of the 2022 Giants Live Strongman Classic. On July 9, 2022, the Ukrainian strongman successfully made it back-to-back years (2021-2022) as the winner of the strength contest.

Rounding out the podium in London, England, Canada’s Mitchell Hooper and the United States’ Evan Singleton finished in second and third place, respectively. Hooper and Singleton earned qualifications for the 2023 World’s Strongest Man (WSM) with their podium results. Novikov has a perennial invitation thanks to his 2020 WSM title.

Here are the final standings from this year’s competition:

Novikov completed his Strongman Classic repeat thanks to a performance where he won three of the five events. He only finished outside of the top three once. Here’s a short recap and the results from each of the contest’s individual events:

In the first event of the Strongman Classic, the 12 athletes had the task of lifting five circus dumbbells ranging from 80 to 120 kilograms (176.3 to 264.5 pounds) to an approved overhead lockout position. Whoever could lift the five dumbbells in the fastest time would be the victor.

With a time of 38.38 seconds, Novikov beat second-place finisher Rob Kearney (42.21 seconds) by roughly three seconds. Hooper could only lift four dumbbells in 31.46 seconds, but his effort was enough for a third-place result.

Black suffered an undisclosed injury during this event and withdrew from the rest of the contest.

The Hercules Hold was a challenge all about grip strength. During this event, the athletes had to hold a 160-kilogram (352.7-pound) pillar in each of their hands for as long as possible with their arms stretched wide while maintaining their grip.

Late contest addition Eddie Williams captured the first-place upset when he held the pillars up for 72 seconds. Paul Smith (67.1 seconds) and Mitchell Hooper (64.65 seconds) rounded out the top three. The Hercules Hold was the only event where Novikov did not notch at least a top-three result.

Notably, Mark Felix holds the Hercules Hold World Record of 83.62 seconds from the 2019 Giants Live Wembley. On this occasion, he finished outside the top five.

[Related: The Best Arm Workouts For Beginners, With Dumbbells, And More]

The third event of the contest saw the strongmen carry two 150-kilogram (330-pound) implements for max distance with a one-minute time limit. The winner would be who could cover the longest distance within that time frame. Novikov (63.3 meters) managed to hold off another promising late addition in Maxime Boudreault (60 meters) to win the Farmer’s Walk. Paul Smith (58 meters) wasn’t far behind his peers in third.

As the competition started to close, Novikov began to separate himself from the other athletes. In this event — where the competitors had to axle deadlift 360 kilograms (793.8 pounds) for as many reps as possible in a minute — Novikov was the only person to finish seven reps. Hooper (six reps) and Felix (five) were the next to flank behind Novikov’s dominant first-place outing.

As is typical in strongman, the famed Atlas Stones were the finisher to this year’s Strongman Classic. The person who could lift all five stones ranging from 120 to 200 kilograms (264 to 440 pounds) into their podiums in the fastest time would be the winner. Boudreault hit the Stones hard, lifting the five stones in 24.03 seconds. Singleton came in second with five stones in 25.59 seconds. In third place, Novikov (25.6 seconds) finished behind Singleton by one-hundredth of a second.

[Related: The Best Shoulder Workouts For More Muscle, For Strength, For Beginners, And More]

With the latest Strongman Classic in the rearview mirror, it remains full steam ahead for Giants Live competitions this year. The organization’s next contest will be the 2022 Giants Live Open and World Deadlift Championships. Those will occur on August 6, 2022, in Cardiff, Wales.