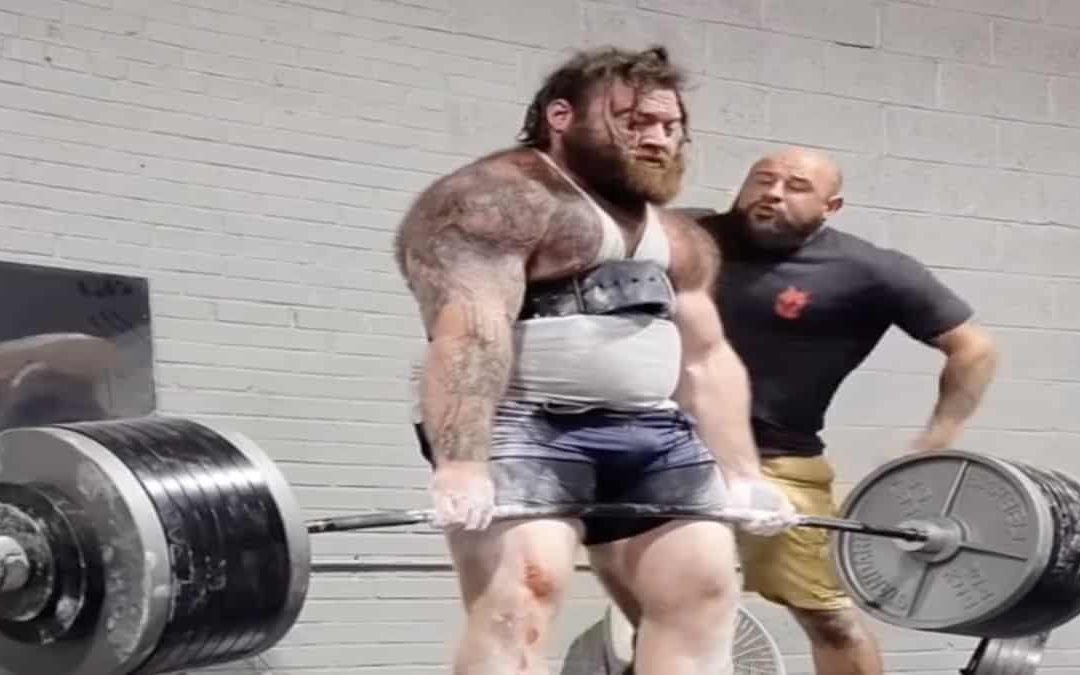 Andrew Hause has risen to powerlifting esteem largely thanks to his squat strength. A recent deadlift feat could point to a future where he’s similarly famous for the staggering amounts of weight he can pull.

On July 12, 2022, over Instagram, Hause — who competes in the 140-kilogram division — completed a 420-kilogram (926-pound) raw deadlift during a training session. The figure is a personal record (PR) for Hause and is 50 pounds more than his competition best of 397.3 kilograms (876 pounds) from the 2021 Revolution Powerlifting Syndicate (RPS) The Showcase Super Classic. Notably, Hause completed that top competition deadlift raw with wraps.

Hause captured this raw PR from a conventional stance while using a mixed grip — where the athlete positions one hand in an underhand position and the other in an overhead position.

In the caption of his Instagram post, Hause references the upcoming 2022 World Raw Powerlifting Federation (WRPF) American Pro as his next sanctioned competition. That contest will take place at The Salisbury Center in Manassas, VA, from July 29-30, 2022.

Hause showing off his deadlift prowess comes on the heels of a recent noteworthy squat achievement.

In early July 2022, the powerlifter completed a 467.8-kilogram (1031.4-pound) squat with wraps PR. He managed to do this while losing roughly 15 pounds a few weeks before the successful attempt. Despite the health obstacle, the squat mark likely shouldn’t have been too surprising given Hause’s history. With a squat of 456.3 kilograms (1,006 pounds) from the 2021 RPS The Showcase Super Classic, he is the current all-time squat Junior World Record (Raw With Wraps) holder.

An approximate week after he squatted 25 pounds more than that record in training, it seems the athlete is well on his way back to full capacity, as this new deadlift PR demonstrates.

Hause’s massive deadlift drew the attention of several prominent powerlifting figures on Instagram, including Larry Wheels, Phillip Herndon, and Eric Lilliebridge. Each of these athletes shortly congratulated Hause in the comments.

[Related: The Best Back Workouts For More Muscle, For Strength, For Beginners, And More]

Hause has made the next imminent goal on his ledger clear. Per the caption of his Instagram, the powerlifter intends to surpass his best-ever competition total of 1,105.8 kilograms (2,438 pounds) from the 2021 RPS The Showcase Super Classic at the 2022 American Pro.

Notably, Hause needs to add only 20.1 kilograms (44.3 pounds) to his total to set a new all-time raw with wraps World Record in the 140-kilogram division. Lilliebridge holds the current record with a total of 1,115 kilograms (2,458.1 pounds) from the 2016 United Powerlifting Association (UPA) Iron Battle on the Mississippi.

At the time of this writing, it is unclear whether Hause will compete raw or with wraps at his upcoming contest. However, according to Open Powerlifting, the athlete has only competed raw once in six career contests. That said, if Hause can exceed both his previous best deadlifts and squat figures in training in some fashion — it seems likely he’ll reach his lofty ambitions.