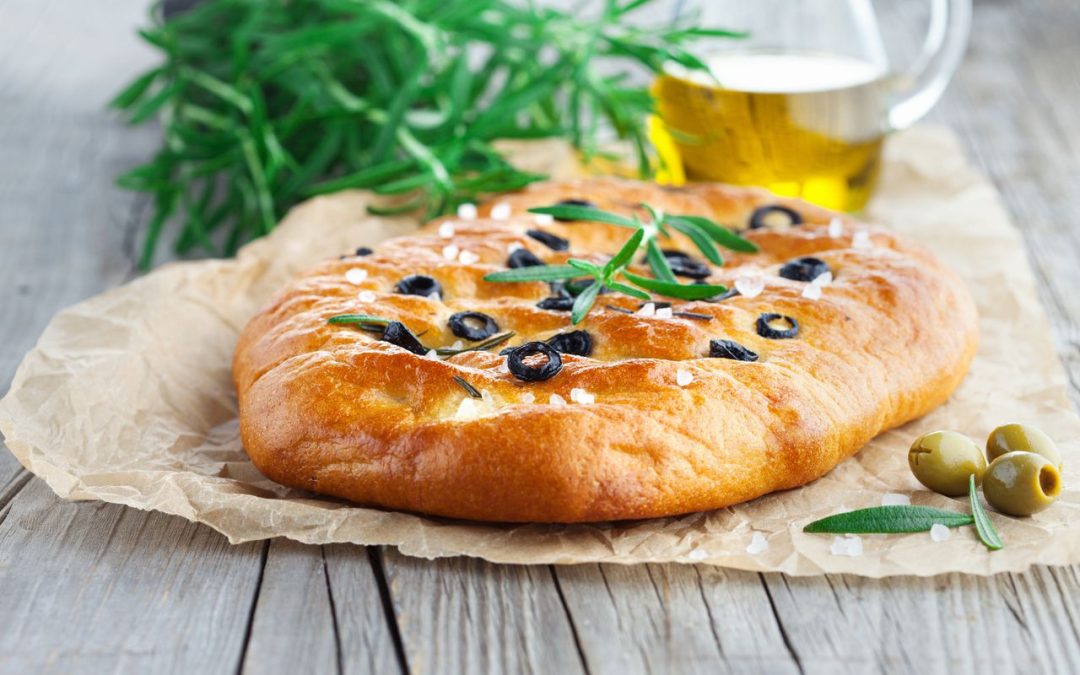 Focaccia is a flat-leavened oven-baked Italian bread that resembles pizza in style and texture. Therefore, people sometimes refer to it as “Pizza Bianca.” Focaccia can be round, rectangular, or square in shape, and you can eat it as a side dish or sandwich bread. In addition, focaccia is fragrant, warm, moist, somewhat chewy, and gratifying. People use it in various ways to produce gourmet family meals.

Focaccia bread goes well with meat, cheese, soups, and other dishes. In addition, focaccia in a sweet variant can act as a dessert or breakfast substitute for toast. You can also consume it independently.

Like pizza dough, Focaccia comprises flour, oil, water, yeast, and salt as the main ingredients. However, it is baked with more yeast than pizza dough, allowing it to rise more and form a fluffier, bread-like loaf. Before baking, focaccias get pierced to retain more moisture.

According to the USDA, a 100g of Focaccia Bread contains the following nutritional values:

Bread is a term that refers to food produced from several bowls of cereal and baked into a dough. Wheat and non-wheat grains such as oats, maize, millet, and others are constituents of different types of bread. Yeast makes the bread rise. Bread is a basic cuisine that people throughout the world consume.

To help us understand, we can associate Focaccia with pizza and regular bread with sandwiches. Focaccia is baked at 475 degrees Fahrenheit, while the baking temperature for traditional bread is 248 degrees Fahrenheit. Focaccia does not get stale easily due to the high quantity of olive oil and other herbs, while traditional bread does. Regular bread is less expensive and has less gluten than focaccia.

Traditional focaccia bread uses comparable components, and variations rarely deviate from the original recipe. Its varieties arise from the toppings utilised, which distinguishes them. Manufacturers sprinkle toppings before baking. Here are some variants of the focaccia bread.

This traditional Sicilian Focaccia is an oven-baked flatbread topped with an oregano-flavoured tomato sauce. In addition, it contains onions, anchovies, breadcrumbs, and local cheese such as caciocavallo, provolone, tuma, or ricotta. Sfincione is one of Arab’s favourite street foods.

The name sfincione comes from the Arab word Asfanaj and Greek sfoungári, meaning sponge, which this flatbread resembles in appearance and texture.

The original focaccia is thought to be Focaccia Alla Genovese. This traditional focaccia from Genova is brushed with olive oil and dusted with coarse sea salt. It is generally a flat rectangular-shaped bread, unlike other focaccias.

Fougasse is the native name for flatbread. Its main ingredients are flour, yeast, salt, sugar, water, and olive oil. The making process involves baking the dough in the oven until golden brown and crispy.

Cudduruni is an Italian focaccia-style bread that originated in Lentini, Syracuse. The key ingredients are beer yeast or mother dough, hard wheat flour, salt, and water. After producing the dough, makers give it a disc shape. Half of it is filled and then folded into a half-moon. The edges are pinched and sealed, giving the edge a rope-like appearance.

Focaccia Seravezzina, also known as Pane Di Azzano, is savoury focaccia made from corn and wheat flour, lard, olive oil, garlic, rosemary, mountain water, salt, and yeast. The dough is moulded and set on wooden tables to rise, drizzled with olive oil and baked in a wood-fired oven.

Pane di Azzano is available in local bakeries. It tastes best fresh and when sliced into pieces.

Messina is the birthplace of this Italian focaccia variation. Flour, semolina, yeast, tepid water, olive oil, salt, and sugar make the focaccia dough. This Focaccia is distinguished from others by its toppings, which include anchovies, tuma cheese, curly endive, and tomatoes.

Before baking, the process involves seasoning the focaccia with freshly ground black pepper, salt, and olive oil. This Focaccia is unlikely to be found outside of particular regions. Cooks in the Parco Dei Nebrodi neighbourhood of Messina like to use Provola cheese instead of Tuma cheese because it imparts a savoury flavour to the bread.

Focaccia is abundant in minerals like potassium. According to research, potassium helps neutralise acids in the body, which might cause bone loss. A high potassium diet is also associated with higher bone density.

Can Aid in Weight Loss

Preparing your focaccia bread the traditional way with extra virgin olive oil will be heartier, with more protein and lipids than regular bread. It also satiates more than other variants.

Focaccia is rich in carbohydrates and proteins. Studies have suggested that carbohydrates digest faster than protein and lipids. Thus, they leave the stomach quickly and do not get stored as fat. Protein and fats in a snack or meal (like focaccia bread) can keep you fuller for longer and make you feel more content with your meal.

Can be Beneficial for Kidney Health

The body requires carbohydrates for energy. Because they digest quickly, carbs are nearly immediately absorbed and utilised. As a result, bread products such as focaccia bread may provide the boost you need first thing in the morning. It can make for an energising breakfast.

Furthermore, according to some studies, the B vitamins thiamin and niacin are essential for energy synthesis. Thiamin is an important component of glucose metabolism. Carbs cannot work properly without enough thiamin. Niacin aids the body’s energy production from the diet. It accomplishes this by helping enzymes in energy production.

Olive oil is also high in ‘good’ fats, as opposed to lard, butter, or palm oil found in commercial baked goods, which can contain hydrogenated fats. When consumed in excess, hydrogenated fats increase ‘bad’ cholesterol, harming your body and health.

Although some people assume that bread has no health benefits, focaccia bread has excellent advantages. The use of olive oil in the traditional focaccia bread recipe enhances its usefulness. In addition, the fact that focaccia bread contains protein and critical vitamins and minerals adds to the appeal of this tasty flatbread.

Cut the focaccia into squares and freeze them quickly. Place your bread slices on a baking sheet lined with parchment paper, leaving space between them. Refrigerate the baking sheet for up to two hours. Wrap the frozen focaccia pieces in plastic wrap and keep them in freezer bags for up to a month.

Wrapping fresh Italian focaccia bread in plastic wrap or keeping it in an airtight container at room temperature is the best way to store it. First, cut it into smaller pieces to make working with your loaf of bread easier. Next, wrap your bread slices in plastic wrap, then aluminium foil. After that, place it in a plastic bag. Homemade focaccia bread will last two or three days if you utilise this method.

Focaccia bread is a high-sodium meal. For people with high blood pressure or on a low-sodium diet, homemade focaccia bread or low-sodium choices would be preferable. However, it is best to avoid eating focaccia if you have any of these issues.

Focaccia bread contains gluten. People who have gluten sensitivity or allergies should avoid consuming focaccia. It can cause wheezing, nausea, vomiting, and diarrhoea in individuals with celiac disease.

Excess consumption of everything is harmful. The same is with focaccia. Focaccia is high in phosphorus. According to studies, extra phosphorus levels in the body can lead to chronic kidney disease, cardiovascular diseases and disruption of bone metabolism.

Focaccia (pronounced fo-Kah-cha) is a flatbread that can be sweet or savoury and is comparable to pizza dough. In Italy, Liguria is well known for Focaccia, termed “classical” in Genoa.

Focaccia is one of the classic Italian street meals, best served freshly baked and loaded with vegetables, meat, or cheeses, depending on the region. In Genoa, Focaccia is called fugàssa. People sell it in slices, either plain or with onions, that are reasonably flat, shiny with oil, and have a soft and crunchy crust. It can be a great midday snack or appetiser.

You should consume Focaccia right away to get the most excellent flavour. However, it can last up to 2 days in an airtight bag. In this case, you can reheat the focaccia in the oven for a few minutes.

Q. What is special about Focaccia bread?

A. Focaccia is made from flour, oil, water, yeast, and salt, like pizza dough. However, it has more yeast than pizza dough, which allows it to rise more and make a fluffier, bread-like loaf. People love focaccia because of its smooth texture and taste. However, it can provide some health benefits, making it better than regular bread.

A. Like croissants and brioche buns, focaccia is high in calories and fat. Most people aren’t aware of it, but it contains a lot of olive oil, which in excess has the same effect. To lose weight, people should choose whole-grain or rye bread, which has more fibre and is lower in fat and calories.

Q. What is the difference between Focaccia and bread?

A. The most significant difference between the two is in their heating temperatures. Focaccia bakes at 475 degrees Fahrenheit, while regular bread bakes at 248 degrees Fahrenheit. In addition, focaccia has a longer shelf life due to its olive oil content. Furthermore, traditional bread is less expensive and has less gluten than focaccia.

Q. Is Focaccia good for health?

A. A moderate consumption of focaccia bread can be healthy. It is because complex carbs in focaccia offer the body energy slowly and help control blood sugar levels. In addition, it gains an advantage if it contains whole wheat flour. It is also rich in vitamin, mineral, and fibre content. The latter aids in slowing sugar absorption and prolonging the sense of fullness, lowering morning hunger.

Q. Do you eat Focaccia hot or cold?

A. Focaccia is best when you eat it warm. Although you can eat focaccia bread cold or toasted, you will find it served more often at room temperature. Though the components are similar to those found in pizza, focaccia usually contains more leavening (yeast) than a pizza.

Q. How long is Focaccia good for?

A. Focaccia is best when it is fresh. But it will keep up to 5 days in the refrigerator or 2 to 3 days at room temperature. One should store it in a sealed bag with any excess air squeezed out in either case. You can freeze it if you need extra time.

Q. Is focaccia the same as ciabatta?

A. Focaccia has a fluffy, cake-like texture similar to pizza dough. On the other hand, ciabatta has a dense texture and a chewy consistency. Focaccia is a baked flatbread style, and ciabatta bakes in loaves.

A. Focaccia bread has a medium glycemic index (GI). According to the USDA, its Gi is 63. Glycemic index is a number between 0 and 100 applied to food, measuring the relative rise in blood glucose two hours after eating that food. Pure glucose is arbitrarily assigned the value of 100.

Q. Does focaccia bread have carbs?

A. Yes, focaccia bread contains carbs. According to the USDA, there are 35.8g of carbs in 100g of focaccia bread. The carbs present in focaccia make it perfect for an energy-packed meal. However, excess consumption may lead to adverse effects.

Q. Is Focaccia a complex carb?

A. Focaccia is primarily a refined carb. Essentially refined carbohydrates provide energy with little nutritional value. Hence, it is best to consume it in moderation.