This Low-Light Houseplant Is Nearly Impossible To Kill (Nope, Not A Snake Plant) 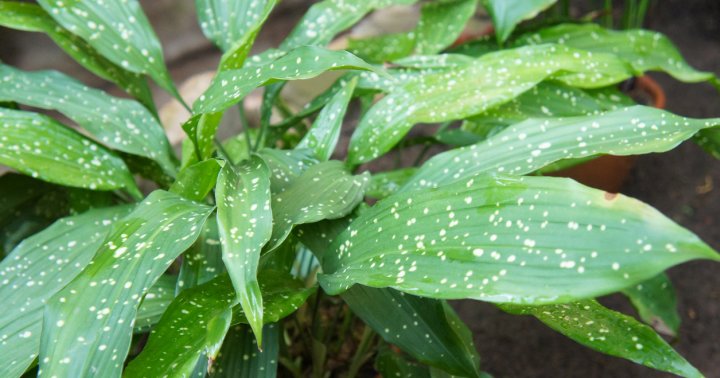 Looking for a hardy houseplant that can withstand a little neglect every now and again? The cast iron plant is one tough one that deserves a spot in your greenery collection. Here’s how to keep this slow-growing beauty alive (don’t worry—it’s super easy!).

“The plant’s notability comes from its ability to survive in lower light and drought-tolerant conditions. It also has a natural resistance to many pests and diseases,” Pangborn tells mbg.

Native to the temperate conditions of Japan and China, the Aspidistra elatior has been a popular houseplant around the world for ages. “The nickname for the cast iron plant emerged alongside its rise in popularity during the Regency era,” Pangborn explains. “It continued to reign as one of the most popular houseplants in the Victorian era. It’s also known as the barroom plant thanks to its ability to survive in extremely low light.”

The standard cast iron plant is known for its long, deep green leaves and the tiny purple flowers you can sometimes spot along its soil line. It also comes in variegated and speckled varieties, known as the Milky Way.

You can find small cast iron plants in most gardening shops and online retailers for around $50. Since it’s a pretty slow grower, taller plants are rare and can set you back up to $100.

As environmentalist and greenery expert Summer Rayne Oakes previously told mbg, this plant would be a perfect fit for someone who doesn’t get much light in their home but still craves a little greenery.

“The cast iron plant is known as a very easy-care houseplant due to its adaptability and resilience,” echoes Pangborn. “It can handle extremes in a watering regimen better than most houseplants and is also tolerant of lower-light conditions.”

Now that you know the basics on cast iron plants, here’s the nitty-gritty of how to take care of it indoors.

Tackle your gut issues now, so you don’t have to think about them later.*

“One of the few things that will kill a cast iron plant is soil that stays too moist, so err on the side of underwatering,” cautions Pangborn. Make sure the plant’s soil is almost completely dry to the touch before giving it a good drink. It can usually go at least one to two weeks between waterings during the hot days of spring and summer, and longer in the winter. If you’re unsure about when to water your cast iron plant, mbg’s guide to proper watering can help.

Pangborn recommends watering slowly with room temperature water until all your plant’s soil is saturated and water begins to drip out of its drainage hole. Wait a few minutes before emptying the saucer of any standing water.

Watering with tap water? Know that cast iron plants can be sensitive to fluoride; too much of which can cause darkened leaf tips.

“If you notice this, leach the soil by placing the pot in a sink or tub and allowing a slow stream of water to run through the soil and out the drainage hole for five to 10 minutes. This will help flush out any mineral buildup,” Pangborn suggests. “You might want to switch to filtered or rainwater to reduce fluoride exposure.”

In the wild, cast iron plants grow nestled underneath the shade of trees, so they’ll feel right at home in dappled sunlight. “When grown as a houseplant, they can tolerate any level of indirect light,” Pangborn notes.

This means that you can get away with placing this plant in a slightly darker spot in your home, a few feet from a window. (Just remember that the less light it gets, the slower it will grow.) The one place you don’t want to put the shade-loving cast iron plant is right in front of a south- or west-facing window that receives a lot of bright light.

Cast iron plants aren’t finicky about soil; any well-draining houseplant potting mix will be fine for them. You shouldn’t need to supplement their soil with fertilizer too often, either. Pangborn says that you’ll want to use an all-purpose fertilizer (diluted to half-strength) about once a month during the spring and summer, at most. This guide to fertilizing houseplants will help you get the hang of it.

“This plant prefers room temperatures ranging from 60 to 80 degrees Fahrenheit but can tolerate temps as low as 50 degrees Fahrenheit,” says Pangborn. This wide range means that the cast iron plant can survive in cooler rooms than some of your other tropical houseplants.

The cast iron plant isn’t too fussy about humidity levels either. It’s one of the few plants that can survive in a steamy bathroom or a dry bedroom. Again, it’s super adaptable. “Other environmental factors that can have a big impact on more sensitive houseplants—like temperature fluctuations or low humidity—don’t even seem to bother the cast iron plant,” Pangborn says.

Since they’re so slow to grow, cast iron plants won’t need to be repotted very often. Once every four to five years should be plenty. Just keep an eye on them and watch out for signs that they’ve outgrown their current home (including unruly roots and dropping leaves) before transferring them over to a new pot.

How to divide a cast iron plant.

While other popular houseplants like pothos can be propagated using a stem cutting, the cast iron plant should be divided at the root level. That’s because its new shoots grow out of small underground bulb-like structures called rhizomes.

If you have a healthy cast iron plant that you want to divide into multiple plants, follow this quick guide. It’s best to wait until spring or summer growing season to give it a try:

As you can see, the cast iron plant really isn’t finicky. But there are a few instances where it could use some extra TLC. Here are some final tips to help you work through any potential hiccups.

The fittingly named cast iron plant is one houseplant that can handle the heat. As long as you don’t give it too much water or sunlight, it can thrive in most conditions, making it a great option for houseplant lovers who travel often or don’t have many bright spots left at home.

Want to learn how feng shui can help you create a high-vibe home and set powerful intentions to manifest your dreams? This is feng shui the modern way – no superstitions, all good vibes. Click here to register for a free session with Dana that will give you 3 tips to transform your home today!