How to Do the Donkey Kick Exercise

Like the animal for which they’re named, donkey kicks get no respect. All you’re lifting is your leg, after all — how hard can that be?

And who wants to do an exercise named for a bucktoothed ass in a straw hat, usually portrayed as the mount for someone’s diminutive sidekick?

But hold on there, partner: Like that sidekick, donkey kicks are underappreciated workhorses.

They fire up lazy muscles, improving mobility, and ensuring the long-term health of some of your most vulnerable joints.

Here’s how to do donkey kicks right.

How to Do the Donkey Kick Exercise

The most common mistake made when performing the donkey kick is overarching the spine in an attempt to raise the lifted leg higher.

That isn’t necessary: The target muscles are the glutes — not the lower back — so you won’t need to lift your leg such that you’re arching your back excessively.

Check this tendency by squeezing your abdomen hard as you approach the top of the move.

Variations on the Donkey Kick

Once you’ve got the base move down, build on it with any of these alternate takes.

Start with your leg extended straight behind you, toes pointed toward the floor instead of upward.

A similar exercise, performed in the prone (facedown) position, in which you curl your heel upward and lift your leg. 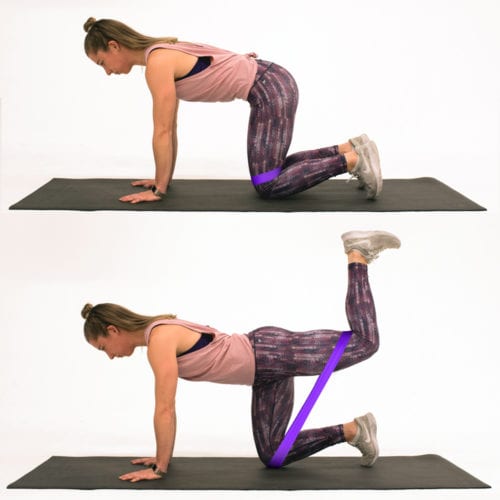 The base move performed with a band around your thighs, which provides additional resistance to the lifting leg.

The base move, but instead of lowering your leg after lifting it, you circle your thigh out to the side as far as possible to help mobilize your hip joint in all three planes of motion.

The base move performed with ankle weights.

Muscles Targeted by the Donkey Kick

“The donkey kick is so named because it mimics the animal’s signature movement,” says Beachbody’s Director of Fitness and Nutrition Content, Trevor Thieme, CSCS. “But true to the animal’s nickname, it will also help you sculpt a great… you get the idea.”

The target muscle in the donkey kick is your gluteus maximus — the largest of the butt muscles — whose primary job is to extend your hip joint (think: getting up from a seated position).

Helping out are the two smaller glute muscles, the gluteus medius and minimus, and the hamstrings — the muscles on the backs of your thighs — which assist the glutes in extending the hips.

In addition to helping you look better from behind, strong glutes and hamstrings help support your posture, protect your lower back and knee joints, and improve your speed and power when you run, jump, and play sports.