Raw Eggplant – Is it Safe for Consumption? 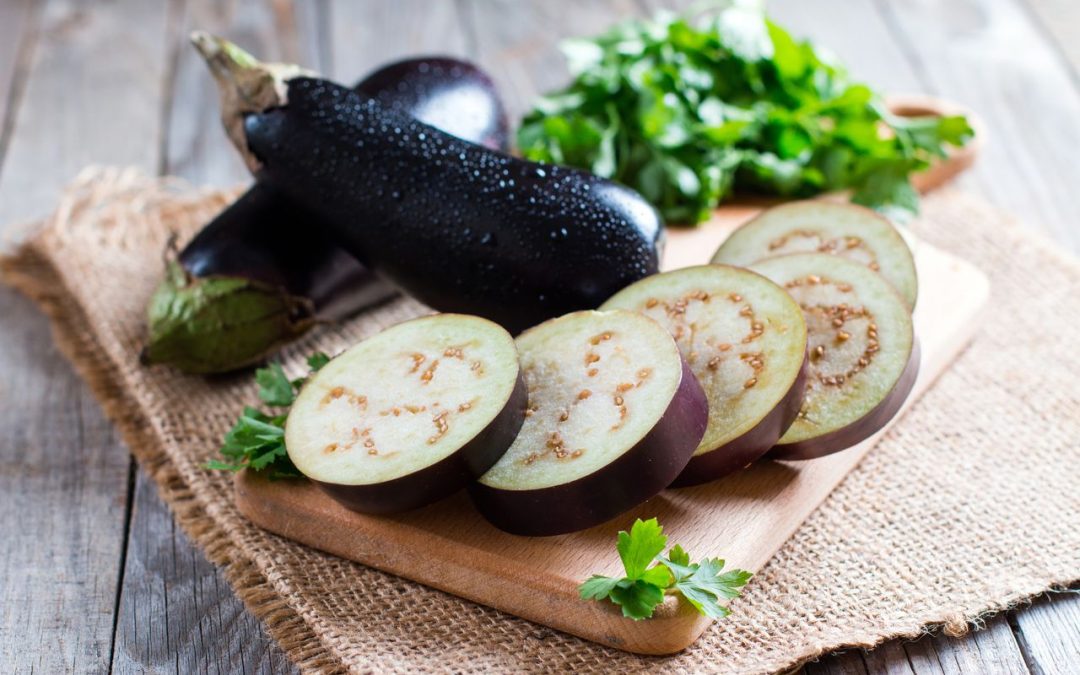 Eggplant is also known as aubergine and brinjal in many parts of the world. Eggplant got its name because of the presence of egg-shaped berries of this plant. Eggplants come under the nightshade category of the Solanaceae family, along with potato, tobacco, tomato, and bell paper.

Another name for this group of vegetables is nightshade vegetables because nightshade means “shade of night”, probably referring to the colour of the berries of these plants. Some also suggest that these plants got this name because they prefer to grow and flower in the dark.

Night shares are unique in the property because almost all contain varying amounts of alkaloid compounds. For example, tobacco has large alkaloid compounds, hence not used in daily diet. However, they are used occasionally in allusion to several cultural festivals, and some abuse them.

Eggplants have been a part of traditional medicine for many years. In India, eggplant was a vegetable used to treat diabetes in earlier times as it contains natural chemicals( obtained from plants ) known as polyphenols.

The importance of polyphenols is that they enhance the metabolism of sugar processing inside the cells. It is helpful for people who have diabetes, as studies suggest. Eggplants are also rich in fibre and antioxidants like vitamins A and C, which fight against free radicals and protect the body from the destructive effects of free radicals.

As per USDA, a serving of 100 grams of eggplant contains:

According to studies, eggplants may not be the most nutritious vegetables, but they provide a lot of goodness. It contains ample amounts of vitamins such as A, C, and K.

These vitamins show the property of free radical scavengers. Hence, eggplants can be a source of antioxidants. It also contains fibre in a sufficient amount, thus can help improve the conditions of people who have diabetes.

It is a relatively guilt-free vegetable because a 100g serving contains only 25kcal of energy and 0.2g fat; hence, it does not increase a person’s weight. Certain studies have also found that eggplants possess cancer-fighting properties though more research is needed to back this.

Consumption of eggplant comes with a lot of health benefits. Raw Eggplant was one of the essential ingredients of traditional medicine to treat many medical complications, including asthma, diabetes, etc. The presence of phenol in eggplant helps process sugar well, thus, in turn, reducing the risk of diabetes.

The vegetable is also rich in antioxidants like vitamins A and C that can help prevent cell damage. Eggplant is even said to be capable of protecting the body from the type of DNA that can potentially cause cancer.

Can You Eat Raw Eggplant?

Yes, eggplant is safe to eat, both raw and cooked. As a part of the nightshade, it also contains the alkaloid compound solanine, though the concentration is not in potent doses.

Hence, it is safe to eat raw eggplants in moderation. But, some people might be sensitive to solanine, and when consumed in large amounts, it can be toxic to them. So, people allergic to solanine should avoid eating eggplants.

Eggplants vary significantly in their morphology, taste, and texture. Some of them are pleasant to eat, while some are bitter. People commonly encounter only those bitter eggplants because they are produced on a large scale. The bitterness is the characteristic feature of the Asian variety of eggplant.

The bitter taste is because of the alkaloid compound, solanine which is toxic in excess doses. It is not poisonous for many people and is relatively safe to consume when eaten raw in moderation. But after consumption, if any person complains of worsening joint pain, arthritis, and gastrointestinal irregularities, they should stop eating them immediately and avoid them in the future.

No significant evidence exists to correlate the symptoms with the causative compounds in raw eggplant. Since more investigation is necessary, anyone experiencing symptoms should avoid eating raw eggplant.

How to Eat Raw Eggplant?

Most people do not prefer raw eggplant due to its bitter taste. Salting an eggplant can help remove the bitterness. It is a two-step process: rubbing eggplant pieces in salt and then rinsing or squeezing the excess salt out.

People can also eat eggplant raw in a salad. Small pieces of eggplant are garnished with carrots and olive oil and seasoned with salt and pepper, making a delightful and delicious salad. Asian long eggplants are more tender and preferred for salads than round-shaped eggplants.

While you can eat eggplant without cooking it, there aren’t a lot of recipes that call for the eggplant to be eaten raw. But there are ways to make eggplant work for you.

For example, you can eat eggplant raw in grain and vegetable salads since it will soak up flavours and dressings. Add sweet dressings and ingredients like carrots, apples, ripe tomatoes and dried fruits to balance the bitterness.

If you are using raw eggplant in a salad with greens, go for leaves with a gentler flavour like lettuce. Avoid paring raw eggplants with bitter greens like radicchio, endive or frisée.

Raw eggplant goes well with pasta with a raw sauce, where the heat of the noodles warms the other ingredients without cooking them. Add diced raw eggplant to cubed fresh mozzarella and diced raw tomato. Toss them with hot noodles and extra-virgin olive oil and garnish them with fresh basil.

Who Should Avoid Raw Eggplant?

While most people can eat raw eggplant, some people are at a higher risk of contracting food poison and may have more severe symptoms. Those with a compromised immune system, aged, pregnant women, and young children should avoid eating raw eggplants. You should monitor your intake if you are concerned about eating raw eggplant because it is part of the nightshade family.

While the leaves and flowers can be toxic, the eggplant is safe to consume raw. You will reach potentially harmful levels of solanine only after eating more than a dozen whole eggplants (at least!) in one sitting.

Eggplants are also a good source of fibre and antioxidants. Antioxidants fight against free radicals formed in the body during metabolism, damaging the internal organs, thereby increasing the life of the cells. And yes, it is safe to eat them raw. Only people with arthritis and complaints of joint pain should avoid eating them.

Eggplants are lustrous vegetables with a purple tinge and a teardrop shape. Aubergine and brinjal are the other terms used for it. It comes under the category of nightshade vegetables. Potatoes, tomatoes, and peppers also come under the same category: the Solanaceae family.

They are unique in that almost all contain varying amounts of alkaloid compound, solanine. It is not a harmful compound in moderate dosages. However, eggplants can be toxic if consumed in excess doses. Some people might show an allergic reaction due to solanine sensitivity.

The morphology of eggplants varies greatly, and many different types of eggplants are grown worldwide, each with unique characteristics. Eggplants provide a good amount of vitamins such as vitamins A, C, and vitamin K despite not being one of the healthiest vegetables present on the earth.

There can be a source of antioxidants, and also one of the most important properties is that it helps people suffering from diabetes due to the presence of polyphenols. Recent trends have brought it to the mainline, and now people are using it in salads. Salads made with eggplant, garnished, and seasoned with other salad items makes it delightful and a better alternative for vegans.

Q. What are the benefits of eating raw eggplant?

A. For thousands of years, eggplant was one of the key components used in traditional medicine. The use of eggplant was to treat diabetes, and its roots help treat asthma in Ayurvedic medicine. Eggplant contains antioxidants, including vitamins A and C, which help protect your cells from damage. It’s also high in polyphenols, natural plant substances that may help diabetic cells digest sugar more efficiently. Early laboratory research on cells reveals that eggplant protects against cancer-causing DNA damage. However, more research is essential on this benefit to humans.

A. No, undercooked eggplant won’t make you sick when consumed in moderation. While the leaves and petals can be hazardous, the eggplant is safe to eat raw or cooked, and the chemical solanine, which some people are sensitive to, is only toxic in large doses. Make sure to consume in moderation because overeating undercooked eggplant might trigger nausea, vomiting, and diarrhoea in sensitive people.

Q. Which vegetables should not be eaten raw?

A. Most of the toxin is present in “young eggplants,” or eggplants plucked early in their plant life. One should also avoid green potatoes since they contain a high quantity of solanine, a hazardous toxin that can cause headaches and nausea. People with hypothyroidism should never consume vegetables from the cabbage family, including cauliflower, Brussels sprouts, broccoli, and sprouts. People with Irritable Bowel Syndrome may find it difficult to digest raw veggies and should avoid eating them.

Q. Who should not eat eggplant?

A. People having solanine sensitivity should avoid eating eggplants. People with arthritis and joint pain also should avoid eating this vegetable as it may worsen the situation further. Nasunin is a phytochemical found in eggplant that can bind to iron and remove it from cells. The oxalates in this vegetable might lead to kidney stones. Finally, eggplant is a nightshade vegetable, which can trigger allergic reactions in some people if consumed in large amounts. So, people should monitor their feeding habits.

Q. What is the healthiest way to cook eggplant?

A. Eggplant can be consumed raw in salads to reap its benefits. Similarly, cooking methods such as grilling, sauteing, baking or stir-frying can also be used as healthy ways to cook eggplant. The most crucial point in cooking eggplant is to heat or boil it at at least 425F.

Q. Is it OK to eat raw eggplant?

A. Yes, eggplant is safe to eat, both raw and cooked. As a part of the nightshade, it also contains the alkaloid compound solanine. However, solanine is not present in potent doses in eggplant. Hence, it is safe to eat raw eggplants in moderation. But, some people might be sensitive to solanine, and when consumed in large amounts, it can be toxic to them.

A. No, raw eggplants are not poisonous. The plant’s leaves and blossoms, however, can be poisonous. The nightshade family of plants, including eggplants, potatoes, peppers, tomatoes, and tomatillos, contains an alkaloid called solanine, which can be toxic in high concentrations. Also, most toxins are present in young eggplants, such as eggplants plucked early in their plant life or immature eggplants.

A. There is no exact answer to this question, as taste is more of a personal thing than a fact. Hence, it can vary according to people. However, it is bitter, and thus it is not liked by many, though some claim they want its raw taste. Some people find this bitterness pleasant and some unpleasant. After cooking, its flavour becomes mild and gets a creamy texture.