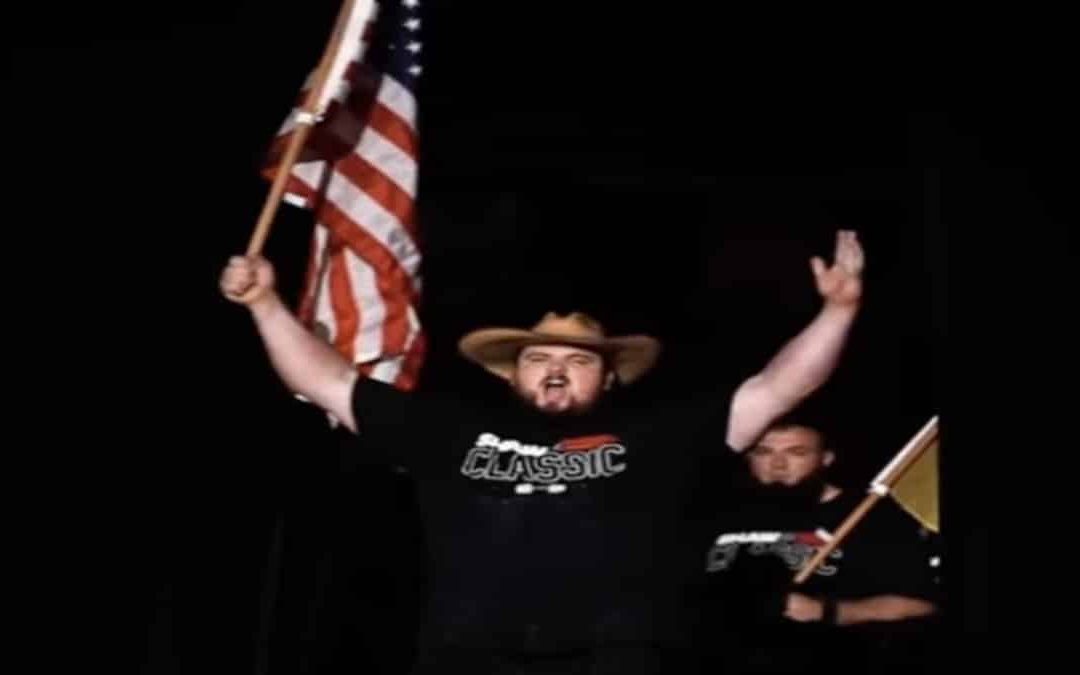 Joining Mitchell on the podium in Loveland, CO were competition organizer Brian Shaw and Mitchell Hooper in second and third place, respectively. It is Shaw’s second consecutive finish in second place after winning the inaugural contest in 2020. Meanwhile, after solid performances in the Giants Live Strongman Classic and Giants Live World Open, Hooper continues an impressive string of performances with a third straight podium result in a major strongman competition.

Here are the final standings from this year’s Shaw Classic:

Check out an event-by-event breakdown below.

Here’s a short recap of how the respective strongmen fared in each of the 2022 Shaw Classic’s events.

In the Bag Over Bar, the athletes had to toss eight bags, ranging from 22 to 29 kilograms (48.5 to 63.9 pounds), over a 15-foot bar. Speed was the tiebreaker if anyone threw the same number of bags. Trey Mitchell (first place) and Brian Shaw (second place) were the only two competitors to toss all eight bags — Mitchell won with the faster time.

On the third event of Day One, the yoke weighed 506 kilograms (1,117 pounds). The strongman had to carry it 60 meters in the fastest possible time. Hooper strode ahead of the field, beating second-place finisher Konstantine Janashia by over four seconds.

During the Circus Dumbbell for Reps, athletes had to lift the titular implement to their shoulder and overhead press it to a complete lockout. On an official’s signal, a competitor could drop the weight and start the process anew. Whoever completed the most reps in 75 seconds would be the victor.

Eight reps for Novikov gave him the event victor. Mitchell (six) and Hooper (five) followed behind.

To start the second day of the competition, competitors had to push through the Log Press Medley. The athletes had the choice of their weight at 172, 186, and 200 kilograms (380, 410, and 440 pounds) and had to perform as many reps as they could within a 90-second time limit. Notably, those who lifted a higher weight but with fewer reps had higher scores.

Mitchell successfully worked his way up to the 200-kilogram (440-kilogram) log, and a double gave him the event victory. Shaw took second place by pressing 186 kilograms (410 pounds) for his own double in second place, while Novikov, Boudreault, and Hooper each pressed that weight for one rep to tie for third.

As the contest shifted to the Medley, there were just 13 competitors left in the field. The athletes had to carry a 363-kilogram (800-pound) frame 60 feet and then perform an arm-over-arm pull with a 318-kilogram (700-pound) implement. The time limit was 75 seconds. In the event anyone didn’t finish, the height of the pull or distance for the carry determined the final results.

Maxime Boudreault won with a stellar time of 24.29 seconds. Evan Singleton (second in 26.32 seconds) and Kevin Faires (third in 27.65 seconds) were the only other athletes to finish in less than 30 seconds. The two overall leaders, Mitchell and Novikov, were the bottom two in this event.

The Car Leg Press was one of the more exciting events for the competitors and fans alike. The weight of the car and sled had a total of 839 kilograms (1,850 pounds). Whichever athlete could complete the most reps before failing or within 90 seconds would be the winner.

Shaw demonstrated his leg strength by winning the event with eight reps. Hooper (seven) and Mitchell (five) rounded out the top three.

As is a custom in many strongman competitions, the Atlas Stones were the final event and would determine the winner of the 2022 Shaw Classic. The five stones weighed between 159 to 204 kilograms (350 to 450 pounds). Competitors faced each other in this head-to-head event with a time limit of 60 seconds.

Mitchell and Shaw were the final pairing as Mitchell beat Shaw to the fifth stone by four seconds to win his second straight Shaw Classic title.

With this edition of the Shaw Classic now in the rearview mirror, this might be the last contest for a little while for some of these competitors. In the meantime, someone like Mitchell can bask in the glory of a second-straight win in what certainly seems to be a competition only growing in more prestige.