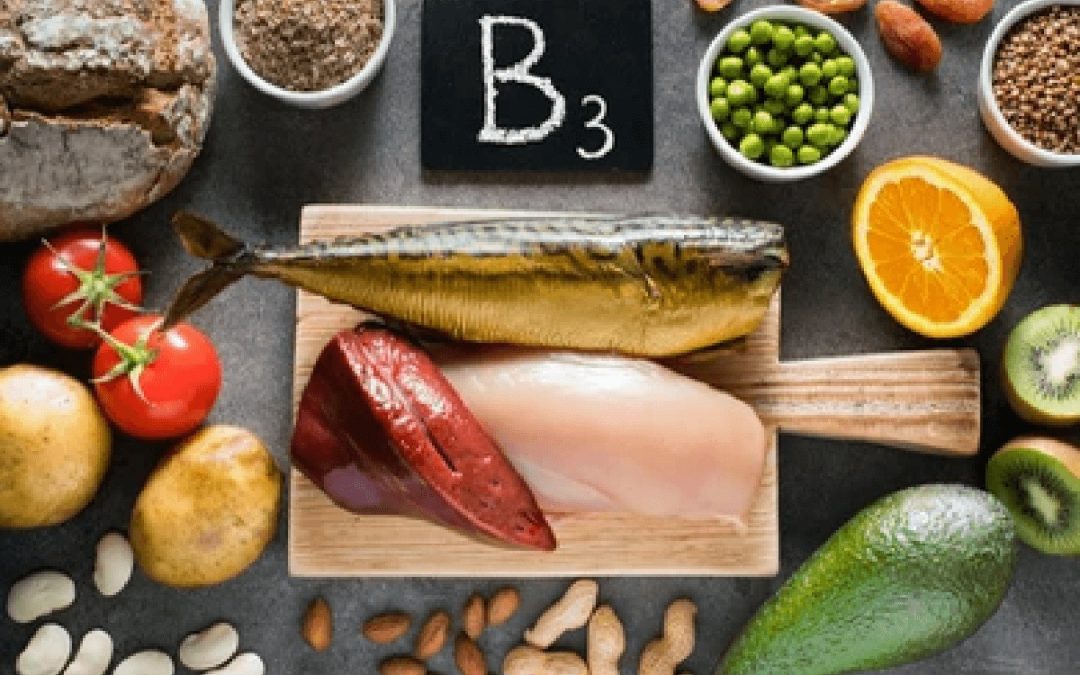 Niacin, also known as vitamin B3, is a water-soluble vitamin. It is an essential micronutrient produced from the amino acid tryptophan. It can get obtained from both plants as well as animals.

Niacin or vitamin B-3 is naturally found in some foods. It works as a cofactor, with more than 400 enzymes dependent on it for multiple reactions. Vitamin B-3 helps to convert nutrients into energy.

It is important for the metabolism of macronutrients like proteins, carbohydrates, and fats. They are also helpful in cell signalling, DNA repair, cellular metabolism, and respiration.

Niacin deficiency leads to critical conditions characterized by 3 D’s – Diarrhoea, Dermatitis and Dementia. Diarrhoea in pellagra is usually associated with anorexia, nausea, glossaries, and dysphagia. It is due to inflammation that extends throughout the gastrointestinal tract. In dermatitis, there is severe skin redness, resembling severe sunburn, particularly on the hands, legs, and neck.

These lesions usually darken and peel off, leaving bleeding sites. The mobility of the affected areas gets reduced. Dementia leads to mood changes and irritability. Chronic deficiency of niacin causes developmental abnormalities and may also lead to neoplasms.

The Recommended Dietary Allowance(RDA) of niacin for adults is 16 mg/day for men and 14 mg/day for women. For pregnant women, 18mg/day, and for lactating women, 17mg/day gets recommended.

Niacin is beneficial for the digestive system because it aids the conversion of nutrients like fats and carbohydrates into energy. Its deficiency makes it difficult for anyone to digest meals and eventually leads to gastrointestinal issues.

Niacin is necessary for the brain to function efficiently and provide energy. Its insufficiency gets linked to mental fog and even psychiatric problems. Niacin can help repair brain cell damage making it an effective treatment for some forms of schizophrenia. It also helps in maintaining brain health in patients with Alzheimer’s disease.

The risk of cardiovascular disease gets further decreased by this vitamin’s involvement in controlling your body’s cholesterol levels. Additionally, it reduces inflammation and oxidative stress, damaging the heart since they tend to harden the arteries and hinder blood flow. It opens blood arteries and improves blood flow. and thus lowers the risk of heart attack and stroke over the long term.

Foods to Boost Your Niacin or Vitamin B3 Levels

According to USDA, 100 grams of brown rice contain about 4.31 mg of niacin. Brown rice is much more nutritious than white rice as bran and germ get removed from white rice. Brown rice is a good source of magnesium, phosphorus, and selenium and is high in fibre.

Peanuts are high in niacin. According to USDA, 100 grams of peanuts contain about 12.1 mg of niacin. Peanuts can be consumed in a variety of ways. They can get consumed directly after roasting or boiling.

Peanut oil is often used in cooking and is highly aromatic. Peanut butter is a commonly used spread made from grounded and roasted peanuts. A peanut butter sandwich is a popular snack among children, but pair it with whole wheat bread to make it healthy.

Potatoes are highly versatile and are consumed as mashed potatoes and in the form of curries. According to the USDA, 100 grams of potato contain about 5.63 mg of niacin.

They are rich in starch and have negligible amounts of fat. They are also a good source of vitamin B6 and vitamin C. However, avoid excessive consumption of potatoes as it might lead to toxicity.

According to USDA, 100 grams of sunflower seeds contain almost 7 mg of niacin. They are usually consumed as snacks rather than including them in meals.

They get generally roasted and eaten plain or salted. Prefer plain sunflower seeds over salted ones. Sprouted sunflower seeds can get used in salads or halwa, a popular dessert in Asian countries.

According to USDA, 100 grams of pumpkin seeds contain almost 5 mg of niacin. They get consumed in similar ways to sunflower seeds. These seeds are usually calorie and nutrient-rich and have an especially high amount of fat, protein, and dietary fibre with excellent amounts of zinc, manganese, and phosphorus.

According to USDA, commercially bought 100 grams of whole wheat bread has 4.43 mg of niacin. Whole wheat is generally superior to regular white bread due to its low glycemic index and higher dietary fibre. Individuals can eat whole-wheat bread with scrambled eggs or peanut butter, depending on their preferences.

Portabella mushrooms are an excellent source of the vitamin B complex. It is also rich in riboflavin, selenium, and many other nutrients. According to USDA, 100 grams of portabella mushrooms contain 4.49 mg of niacin. Included it in the diet by grilling and steaming it. It can also be consumed raw.

Chicken liver has numerous health benefits, that includes the prevention of heart diseases, stroke, hypercholesterolemia, etc. According to USDA, 100 grams of chicken liver contains 9.73 mg of niacin. You can include chicken in your diet, for example, chicken soup, salad, sandwich, and chicken curry.

Red meats are a good source of niacin. According to USDA, 100 grams of pork contains 6.68 mg of niacin. It is rich in other essential nutrients like vitamin D, selenium, phosphorus, and thiamine. Furthermore, it is a good source of protein. Pork is a suitable food for weight gainers.

Beef liver is nutrient-dense and has numerous health benefits. It has the highest amount of niacin per serving. According to the USDA, 100 grams of beef liver contains 13.2 mg of niacin. It also includes several other nutrients such as iron, magnesium, phosphorus, potassium, zinc, vitamin D, folate, riboflavin, pantothenic acid, selenium, vitamin A, and vitamin E. The liver can be boiled, fried, or consumed in the form of curry.

Tuna is an excellent source of B3 vitamins. According to USDA, 100 grams of tuna gives 18.5 mg of niacin. It is an extremely versatile ingredient in sushi, sandwiches, and salads. This healthy fish has various health benefits; it includes preventing cardiovascular health, supporting the immune system, boosting metabolism, and promoting weight loss.

Niacin is a vital nutrient that has various roles in maintaining good health. It must be consumed in suitable amounts to avoid deficiency that leads to several health problems.

Its deficiency leads to pellagra, a serious condition characterized by 3 D’s: Diarrhea, Dermatitis, and Dementia. Various food sources include niacin naturally and can get included in the diet.

However, anything in excess can be detrimental to health. However, a high level of vitamin B3 consumption can cause dizziness, rapid heartbeat, diarrhoea, gout, abdominal pain, itching, nausea, and severe skin flushing.

Q. What fruit has the most niacin?

A. In general, fruits do not have a high niacin content. However, avocado, papayas, and raisins contain niacin. The amount ranges from 1.74- 0.766 mg per 100 grams. Apart from that, they are also rich in good fats, fibre, vitamin C, and vitamin K. The high fibre content makes it excellent for gut health. They also help in maintaining the lipid profile and promote heart health.

Q. What vegetable has the most niacin?

A. Green peas, portabella mushrooms, and potatoes are good sources of niacin. According to USDA, potatoes consist of 5.63 mg of niacin per 100 grams. Therefore, including these in your diet can raise your niacin levels.

Q. What has a lot of niacin?

A. Niacin is widely available in red meats like beef liver, beef, and pork. Moreover, it is also present in chicken, tuna, and salmon. Peanuts, brown rice, mushrooms, and potatoes are great vegetarian sources of niacin. Also found in trace amounts in tomatoes and strawberries.

Q. Does oatmeal have niacin?

A. Oats or oatmeal has a very low amount of niacin. This nutrient gets found in almost negligible traces. 100 grams of niacin contains only 0.23 mg of niacin which is 2 per cent of the daily requirement.

Q. Are eggs high in niacin?

A. Eggs contain a negligible amount of niacin. 100 grams of eggs contain only 0.075 mg of niacin. However, they are rich in protein, riboflavin, vitamin B12, and phosphorus.

Q. Do sweet potatoes have niacin?

A. Yes. 100 grams of sweet potatoes contain 1.5 mg or 10 per cent of the daily niacin requirement. They are also high in complex carbohydrates, dietary fibres, vitamin A, vitamin C, and manganese. They get best consumed in boiled or roasted form.

Q. Do blueberries have niacin in them?

A. Yes, blueberries do contain niacin but in a very small amount. 100 grams of blueberries have only 0.418 mg of niacin. However, they are rich in phytochemicals. They are a good source of vitamin C, K, and manganese.

Q. Do strawberries have niacin?

A.Strawberries have negligible amounts of niacin. 100 grams of strawberries contain only 0.386 milligrams of niacin. However, they are a good source of vitamin C and manganese.

Q. Are tomatoes high in niacin?

A. Tomatoes are not high in niacin. They contain trace amounts of niacin, i.e. 100 grams of raw tomatoes contain only 0.594 mg of niacin. Tomatoes generally are high in vitamin C, folate, potassium, and antioxidants.

Q. How much niacin is in peas?

A. Green peas (100 grams) contain 2.09 mg of niacin. They are also a good source of vitamin B-1 and vitamin C along with vitamin K. They are also high in dietary fibres, which is good for gut health.