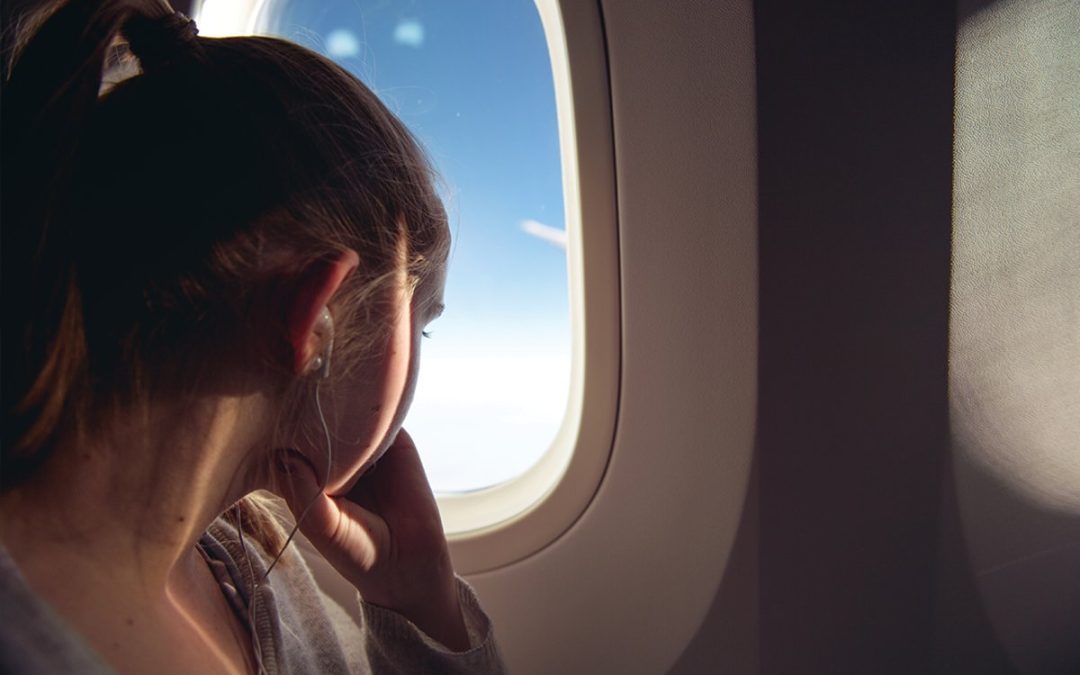 Did anyone else feel that drop? Is the guy next to me freaking out? Where are the flight attendants and do they look concerned? Who’s to say this thing won’t just fall out of the sky? Oh no, oh no, oh no. So goes my anxious mind every time I set foot on an airplane.

I’ve been a nervous flier for the past decade, but my airplane dread was fully solidified last year over the mountains of Montana, around minute 20 of hour-long turbulence. On the last few flights since, I’ve cried, reached out to hold a stranger’s hand, and said mental goodbyes to my loved ones—sometimes all at the same time. It doesn’t help that air travel also gives me a nagging sense of eco-guilt for all of those carbon emissions.

Clearly, I don’t have the best tools for dealing with my flight stress. Deep breaths, distracting podcasts, and logical reasoning are what I usually call on to challenge irrational fears of crash landings, but they can only go so far.

So, before my last trip—a short flight from New York to Detroit—I packed something new in my carry-on to see if it could help: mindbodygreen’s calm+ supplement.

Small planes elicit a new level of terror in me, so I couldn’t help but groan once I saw that the flight had a 2-2 seat layout.

“It’ll be fine,” my fiancé said as we slid into our seats which were, thankfully, next to each other. (Strangers’ hands were safe for today.) I waited until I got strapped in before washing down one calm+ gelcap; I knew from taking the supplement for work stress and productivity that it went to work quickly thanks to a unique combination of USDA- and EU-certified organic full-spectrum hemp oil, ashwagandha extract, and lavender oil.*

Since I work at mbg, I have the inside scoop on the calm+ ingredients—all included for their strong (and research-backed) ability to ease the stress response and help restore balance throughout the body.* I’d found them effective at helping me deal with the stressors of everyday life, like deadlines and emails, but today was the first time I’d put them to the test against such a different source of anxiousness.*

Fast forward 20 minutes after taking the supplement and so far, so good. It was a morning flight and I figured it might just be sleepiness that kept me so settled once we began taxiing. But once we started takeoff—my least favorite part of flying, by far—I knew that there was more to it than that, and calm+ was having an effect.

While my head still filled up with nervous thoughts as we gained elevation, I found that they didn’t escalate nearly as quickly as they usually did. It felt easier to breathe through them, remain level-headed, and talk myself down when I started to get worked up. In short, the nerves were still there, but they felt less intense.

I didn’t flinch when the people in front of me opened their window shades to let in the views of the outside world that I’d usually rather forget about once becoming airborne. And once we started cruising, without a racing heart and mind to distract me, I was able to actually pay attention to an entire podcast episode. All in all, it was the easiest flight I’d had in a while—even with the slight turbulence we encountered before landing in Detroit.

While flights (no matter how long) always make me feel exhausted from all that sympathetic nervous system activation, I stepped off the plane ready to fully show up for the rest of my trip. And since the premium European hemp in calm+ contains such trace amounts of THC, I didn’t feel mentally impaired at all; just relaxed. I know the toll that stress can take on the body, so I counted this a major win for getting my trip off on a healthy foot.

I hadn’t overcome my fears of flying by any means, but at that moment I knew I’d found a tool to help make them feel more manageable.

I’m grateful to mbg’s calming supplement for helping me deal with my airplane jitters and get from point A to point B a little easier.* Will I be hopping on a helicopter ride anytime soon? No. But will I gladly RSVP for my friend’s wedding, even though it requires a 2-hour flight? Yes—but you can bet calm+ will be coming along for the ride.