Alcohol: What Does It Do To My Glucose Level? 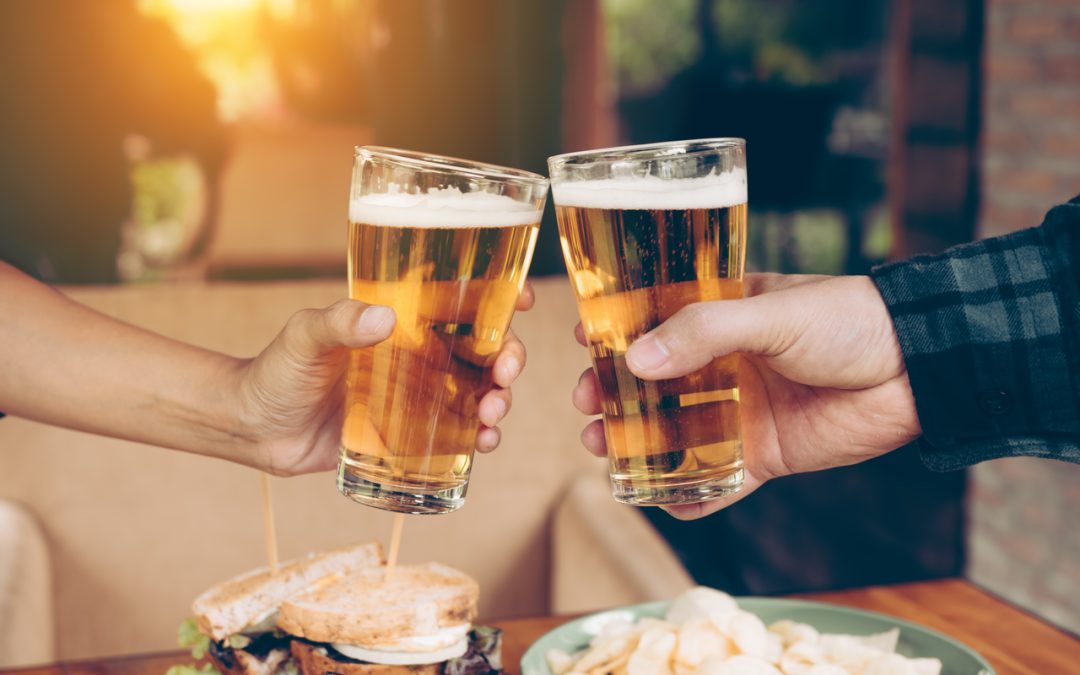 Alcohol is a substance that people have been using in many cultures for centuries. It is scientifically known as ethanol or ethyl alcohol. Though alcohol may be socially acceptable in a lot of cultures, the adverse impact that it may have on your health and well-being cannot be understated. The effect is even more significant if you have an imbalanced glucose level, as alcohol may worsen the complications of diabetes.

To make the proper food choices for a healthy lifestyle, HealthifyPro 2.0 can be helpful. The wearable CGM-based BIOS device helps to monitor blood glucose levels continuously. If a surge occurs beyond the normal limit, it can notify its users. As a result, HealthifyMe coaches can develop a better, more specialised diet plan for you by considering the differences in blood glucose levels and users’ food consumption.

Alcohol has a mixed effect on the glucose levels in your body. After taking alcohol, the sugar levels in the body rise initially and then go dangerously low. To understand this effect, first, you should understand the role of the liver in regulating blood sugar levels in the body. The liver is responsible for releasing glycogen in your body. Glycogen is a complex polysaccharide which stores glucose in mammals.

Alcohol has a high amount of sugar in it. So, when you drink alcohol, the sugar from it enters your bloodstream. It results in a sudden spike in your blood sugar levels. This spike typically occurs for 1-2 hours. Furthermore, the body starts absorbing and using the sugar, and the blood glucose levels start decreasing.

The sugar from alcohol impairs liver function. As the sugar level in the blood increases due to alcohol, the liver produces less glycogen. As a result, the liver continues to have significantly less glycogen until a large quantity of alcohol gets eliminated from the body. However, this takes approximately 12 hours. Therefore, the combination of these two processes (utilisation of blood sugar from alcohol by the body and decreased glycogen from the liver) can push the blood glucose levels dangerously low.

If you have diabetes, you may also be taking insulin injections, which regulate blood sugar levels in the body. Diabetic drinking alcohol is at a greater risk of low blood sugar levels, which can severely impact their health in the long run.

Alcohol has a conflicting influence on your body’s glucose levels. It contains a significant quantity of sugar. When you consume alcohol, the sugar in it enters your bloodstream and causes a rapid increase in blood sugar levels. This increase usually lasts 1-2 hours. Following that, the body begins to absorb and use the sugar, and blood glucose levels start to fall. The liver generates less glycogen as the blood sugar level rises from alcohol. As a result, the liver has much less glycogen until a considerable amount of alcohol gets removed from the body.

Glucose is the principal source of energy. The cells of the body use glucose to perform their functions. As a result, glucose is essential for the proper functioning of the organs. An adult’s ideal fasting blood glucose level is 100 mg/dL, and the same level for two hours after a meal is less than 180 mg/dL. If the blood sugar levels fall below 70 mg/dL, the person has low blood sugar. This condition is also known as hypoglycemia.

It would mean the person does not have enough energy to support the body’s essential processes. Consequently, the person may experience some adverse symptoms. These symptoms may range from mild to very severe. Research shows that short-term symptoms may include brain bleed and heart attack. In addition, low blood sugar may start affecting specific body organs in the long term. Check a brief list of these common symptoms below:

Mild symptoms include difficulty concentrating, confusion, headaches, nervousness and anxiousness. When the blood sugar levels drop while you are asleep, you may experience sleep disturbances and nightmares. If you do not get medical help in time, low blood sugar levels may cause unconsciousness and seizures. In rare and extreme cases, it also leads to coma and death.

It is perhaps the most apparent issue that hypoglycemia can cause. Over time, low blood sugar levels can hamper your vision by targeting various parts of the eye. As a result, it causes diplopia, blurred vision and loss of ability to contrast.

Studies have shown that it can reduce the retina’s sensitivity and response and cause the retinal cells’ death. It can also cause cone cell death and eventually loss of vision.

May Hamper The Digestive System

Low blood sugar over a long period may lead to a digestive condition known as gastroparesis. If you have gastroparesis, food stays in your stomach longer than usual. It may cause damage to the vagus nerve (which connects the stomach and the brain). It further inhibits food movement from the gut to the small intestine. Symptoms of gastroparesis include nausea, vomiting, reduced appetite, abdominal pain and even heartburn.

Unhealthy For The Heart

Research states that this may cause irregular cardiac activity, and may also cause heart palpitations. Nocturnal hypoglycemia also increases the risk of sudden death due to cardiac arrest during sleep.

Impact on The Endocrine and circulatory Systems

Low blood glucose levels over a long time can also harm the endocrine and circulatory systems. Also, research suggests this happens primarily due to the damage done to nerves that carry important information. The circulatory system responds by reducing the amount of insulin in circulation.

The impact of hypoglycemia is not limited to the physiological level and spills into the psychological space. For example, sustained periods or recurrent episodes of hypoglycemia may diminish your quality of life.

The body has its way in which it tells you that your blood glucose levels are low. Common symptoms include feeling shaky, feeling hungry, clumsiness and headaches. However, some people having low blood glucose may not experience these symptoms. As a result, they may not come to know that something is wrong with their bodies.

Low blood sugar levels may cause lots of central nervous system complications. Furthermore, it could result in fatigue, headaches, nausea, uneasiness, anxiety, and irritability. To eliminate these symptoms, one should check their blood sugar more frequently, stay hydrated, and work with their nutritionist to change their diet as per the requirements. Also, one should consult a doctor periodically if their blood glucose is abnormal. Low blood sugar levels can be risky because they affect how well the brain can absorb glucose from the blood. In extreme cases, unregulated blood sugar levels can lead to coma or even death.

If you have diabetes, you are more vulnerable to the adverse effects of heavy alcohol intake. Therefore, it is best if you can avoid alcohol altogether. Alcohol interacts with the medications like insulin and sulfonylureas, commonly used to treat diabetes. It also prevents the liver from functioning effectively.

However, in case you wish to consume alcohol on an occasion, here are a few tips for your safety. As per a study by the American Diabetes Association, the following are some guidelines that you should keep in mind while taking alcohol. They can help you minimise the adverse effects of alcohol on your overall health:

Other Effects of Alcohol on Diabetics

Besides impacting blood glucose levels, alcohol can have various other ill effects on your body if you have diabetes. Below is the list:

Ketoacidosis is a common problem in people with diabetes. During ketoacidosis, the body has excessive amounts of acids known as ketone bodies. As a result, triglycerides break down as free radicals that reach the liver through the bloodstream, and this causes severe health consequences.

High amounts of alcohol in the blood can exacerbate ketoacidosis in people with diabetes and even cause it in non-diabetics. It may cause symptoms like nausea, vomiting, coma, and death.

Alcohol may decrease Vitamin E levels in the body. Research says that vitamin E is crucial in protecting cardiovascular health, and the deficiency of Vitamin E may have harmful effects in the long term.

The condition of elevated triglyceride levels is known as hypertriglyceridemia. It is a common problem in people with diabetes. Heavy drinking (about 140 grams of pure alcohol per day) may also lead to hypertriglyceridemia in non-diabetics. In addition, it can cause pancreatitis (inflammation of the pancreas). A possible mechanism may be stimulating VLDL particles, hampering the pancreas’s ability to produce insulin. As a result, it becomes even more challenging to control blood sugar levels in the body.

It is a condition in which nerves near the spinal cord get affected. As a result, it becomes difficult to control the function of motor nerves. It may lead to symptoms like burning, pain and numbness, especially in the leg. A study done on 541 diabetic men provides substance for the claim that alcohol consumption increases the risk of peripheral neuropathy. The study showed that the men, who used to drink more, developed symptoms of peripheral neuropathy faster than men who consumed less.

Abnormal lipid metabolism is a common problem in people with diabetes. It increases with heavy drinking. Not only this, but heavy drinking can also cause a problem in non-diabetics. This further increases the risk of cardiovascular diseases.

Alcohol has a mixed effect on blood sugar levels: Blood sugar rises immediately after alcohol consumption and then drops to dangerously low levels. Heavy alcohol consumption can lead to hypoglycemia. Hypoglycemia is generally a less talked about condition, but it may have severe implications for your health. These include impaired cognitive function, visual disorders, digestive disorders, greater risk of cardiovascular diseases and abnormal functioning of other body parts.

The health implications for diabetics may be even worse as they are more vulnerable to the ill effects of alcohol. Therefore, it is best to quit alcohol to save yourself from the above-mentioned ill effects.