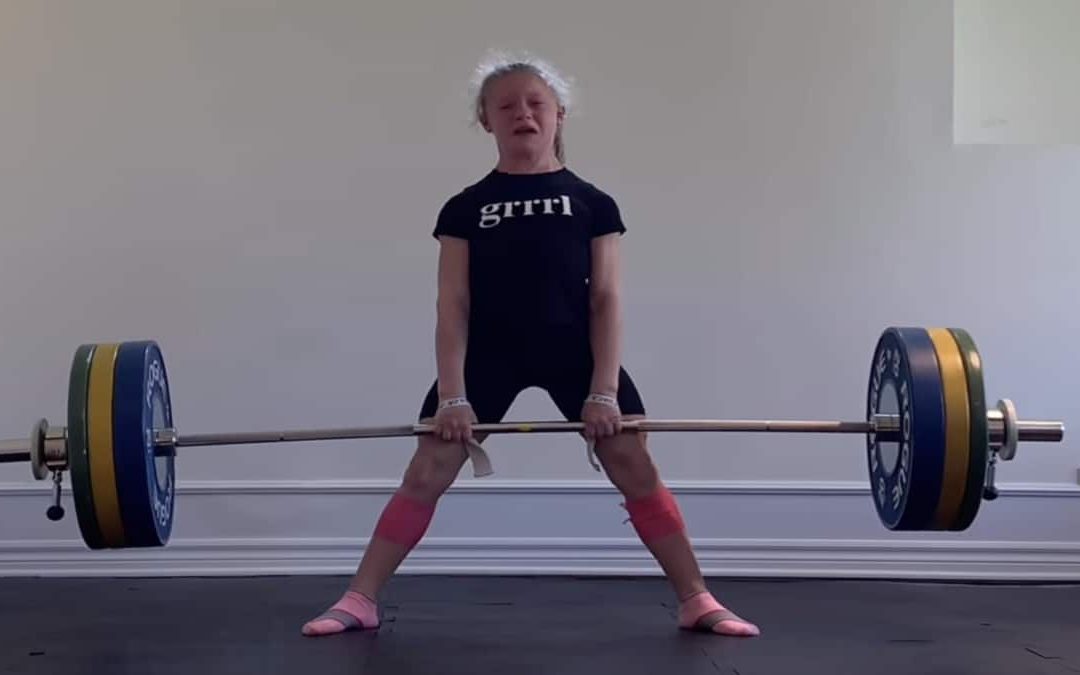 At nine years old, most kids are probably riding their bikes or playing video games with their friends in their free time. The prolific nine-year-old weightlifter Rory van Ulft (30KG) spends much of her downtime showing off incredible strength for her age by lifting heavy weights.

On Sept. 12, 2022, van Ulft posted an Instagram clip where the young athlete locks out a 111-kilogram (244.7-pound) raw deadlift from a sumo stance while wearing lifting straps during a training session. It is unclear whether van Ulft is wearing a lifting belt in the footage. According to the reigning three-time United States National Champion’s caption, the pull is 3.43 times her body weight of 32.3 kilograms (71.1 pounds) at the time of the filmed lift.

Notably, van Ulft’s loaded barbell does shift a bit as she initially tries to lock out her rep. Still, she manages to complete a lockout on a lift that would likely count in an official powerlifting competition.

The strongest kid ever is a girl!?

For more context, van Ulft’s deadlift is one kilogram (2.2 pounds) above the USA Powerlifting (USAPL) Youth Boys’ division record in the 67.5KG weight class — a category over twice her size. Jackson Bo Jensen holds that official mark of 110 kilograms (242.5 pounds) from the 2021 USAPL Youth Nationals.

On an international powerlifting scale, van Ulft’s achievement holds up to an impressive par, too. Her new massive deadlift from training is similarly one kilogram (2.2 pounds) higher than the second-heaviest all-time raw deadlift in the Men’s Youth division 53-kilogram weight class. Elbrus Dzhatiev owns that figure with a pull of 110 kilograms (242.5 pounds) at the 2019 Global Powerlifting Alliance (GPA) European Cup.

Based on her rapid training progress in recent years, a deadlift like this might have been inevitable for van Ulft.

In September 2021, when she was eight, the weightlifter deadlifted 80 kilograms (176.4 pounds). Earlier this year, in April 2022, the athlete scored a beltless deadlift of 90 kilograms (198.4 pounds). For someone whose social media is rife with clips of snatches and clean & jerks to prepare for her primary niche as a weightlifter, van Ulft showing versatile strength on a lift outside of that competitive sphere is plenty commendable.

At the time of this writing, van Ulft has not revealed any upcoming plans for formal competition. Though, it might not be long before she defends her title again. The athlete might parlay her training milestones into a fourth National Championship whenever she is seen on a sanctioned weightlifting platform once more.