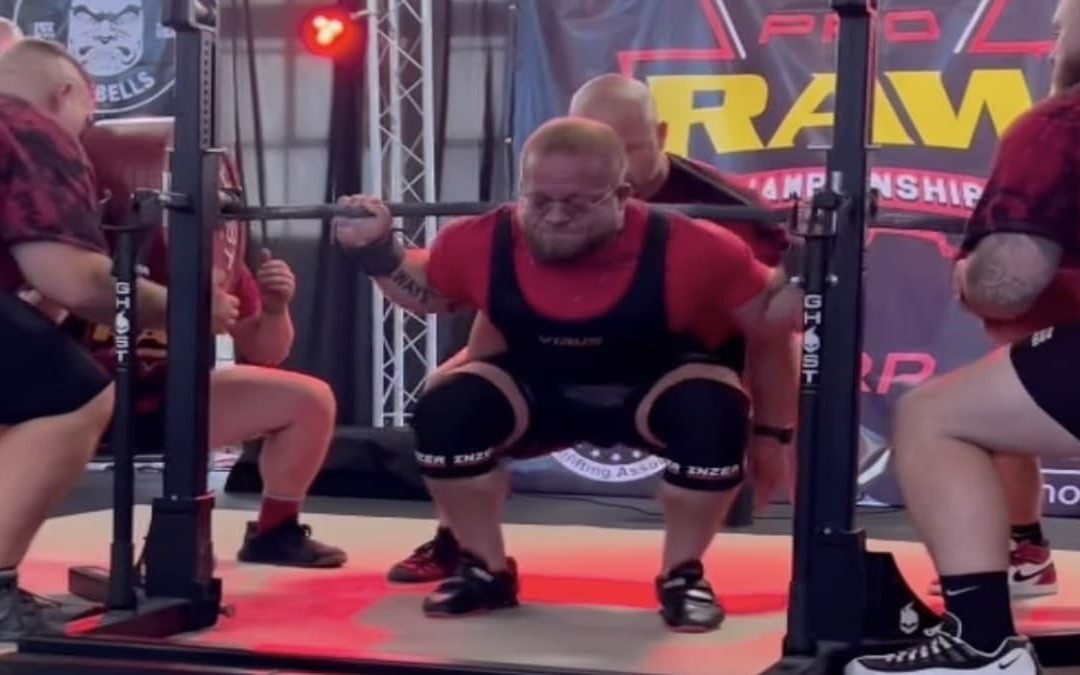 On Sept. 24, 2022, during the latest edition of the United States Powerlifting Association (USPA) Raw Pro, Sullivan captured a 385-kilogram (848.8-pound) raw back squat. It is a new World Record in the 100-kilogram weight class, surpassing his previous own record mark by 5 kilograms. Sullivan scored that past figure of 380 kilograms (837.7 pounds) at the 2021 World Raw Powerlifting Federation (WRPF) The Bucked Up Showdown.

The 2022 USPA Raw Pro in North Kansas City, MO, was Sullivan’s first meet since that WRPF competition. The athlete wore a lifting belt, knee sleeves, and wrist wraps for his squat record.

[Related: Back Squat Vs. Front Squat: Which, When, and Why]

In his overall performance, Sullivan also logged a bench press of 237.2 kilograms (523 pounds) and a deadlift of 274.9 kilograms (606 pounds). However, according to a recap on his Instagram, Sullivan wrote that he broke technical rules on his bench press, and it didn’t count.

As a result, he intentionally scratched on a third deadlift attempt and left more on the table with his top pull once the overall total (goal undisclosed) he wanted was out of reach because of his bench press misstep. (Note: Full outlined results for the 2022 USPA Raw Pro are not available at the time of this article’s publication.)

“I felt electrical after my opener and knew I would not be missing whatever I loaded on the bar that day,” Sullivan wrote. “You can see that in the celebration of my second attempt.”

In an Instagram post from the aftermath of the contest, Sullivan appeared to be appreciative of his new staggering squat record and the support he received from loved ones along the way.

“What a day it was yesterday [Sept. 24, 2022],” Sullivan wrote. “I didn’t know I could feel that much love and support, but [expletive], was it more and more as the day went on. With all of that love, power, and support for not only me but the work I’ve put in, how could I possibly fail? As soon as I touched a bar in the warm-up room, I knew I was not missing today.”

Should Sullivan add 20 kilograms (44 pounds) to his squat in the coming weeks and months, he’d become the first 100-kilogram athlete to squat 400 kilograms (881.8 pounds) raw. If the athlete continues this potential new precedent of competing in a sanctioned contest roughly once a year, he may well come close to that lofty achievement sometime next year.