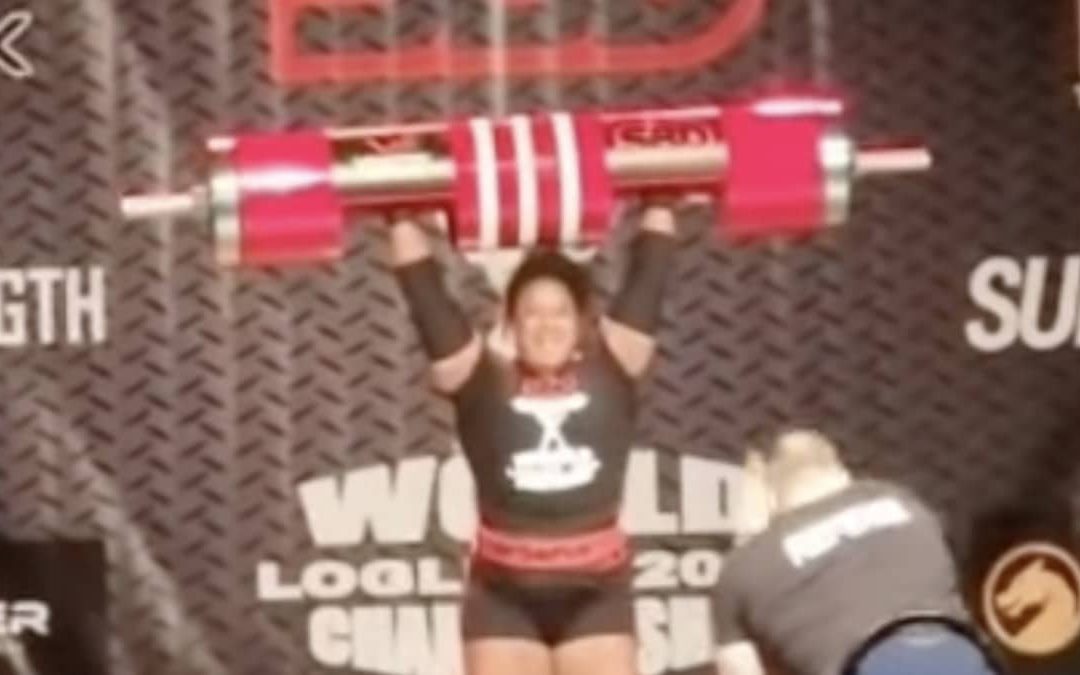 Andrea Thompson has set a Log Lift World Record of 140 kilograms (308.6 pounds). The strongwoman scored the feat at the 2022 World Log Lift Championships (WLLC) on Oct. 9, 2022, in Ipswich, United Kingdom. It extends the previous World Record by five kilograms (11 pounds). That mark also belonged to Thompson, who accomplished a 135-kilogram (297.7-pound) in the July 2020 World’s Ultimate Strongman (WUS) “Feats of Strength Series.”

To help her with her log lift feat, Thompson donned a lifting belt, knee sleeves, elbow sleeves, and wrist wraps. The athlete shared an Instagram post featuring her complete log lift performance. Her successful lockout with the record-breaking weight can be seen in the fourth video below:

Thompson’s output at the 2022 WLLC was so successful she extended her past World Record on her third attempt of the day. The athlete pressed 137.5 kilograms (303.1 pounds) and, evidently, with more strength left in the tank, went for the hallowed 140-kilogram figure on her fourth try. A confident beaming smile from Thompson as she appeared to wait for a down signal from the official might have told a perfect story of the athlete’s feelings at the moment.

Before notching her latest World Record, Thompson had trained with 2016 Europe’s Strongest Man (ESM) Laurence Shahlaei. Thompson had notably called her shot during a recent YouTube exercise session with Shahlaei, saying she “would break the record, then go for 140 kilograms.”

In a post on her Instagram, Thompson thanked the former ESM champ for “always believing” in her. Meanwhile, the comments of Thompson’s log lift World Record post feature words of praise from notable figures in strongman/strongwoman congratulating the athlete for her milestone — including Paul Smith, Annabelle Chapman, and Lucy Underdown.

Thompson’s new record adds to a noteworthy catalog of accomplishments as a strongwoman. In addition to a first-place result at the 2018 World’s Strongest Woman (WSW), the athlete was in possession of the strongwoman deadlift World Record of 290 kilograms (639.4 pounds). The successful pull happened at the October 2020 edition of the WUS Feats of Strength Series. Underdown went on to break that record during the 2022 Britain’s Strongest Woman contest.

Thompson has written that her next competitive appearance would be at the 2022 Official Strongman Games. That competition will take place on Nov. 11-13, 2022, in Daytona Beach, FL. According to Strongman Archives, if Thompson finishes on the podium, it will be her fifth appearance in the top three in her last seven contests dating back to December 2018.

As the sample size of Thompson’s illustrious career shows, anything might be possible.