This Underrated Sweetener Has Vitamins & Minerals — But Is It Healthier? 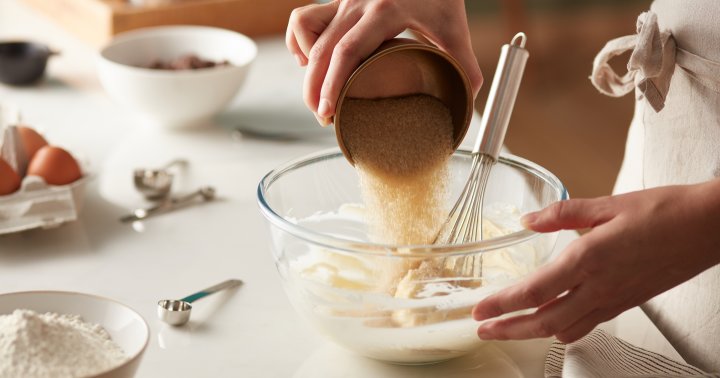 Got a sweet tooth? Even if you don’t, sugar is a prevalent ingredient in so many areas of the kitchen, from cutting the bitterness of your coffee to adding necessary flavor to baked goods. While white sugar is perhaps the most popular iteration, there are actually a range of sugars that you can swap into recipes for different flavors (and functions!)

One type that’s a bit less common in pantries: demerara sugar. How is it different from other sugars? And what recipes does it complement best? Experts break down everything you need to know about this lesser-known sweetener.

Demerara sugar is a light brown, minimally processed cane sugar made from dehydrating sugar-cane syrup. “In the process, it preserves a small amount of natural molasses, giving it a toasty brown color and large grain texture and toffee/caramel flavor,” adds registered dietitian nutritionist Ginger Hultin, M.S., RDN, owner of ChampagneNutrition and author of the Meal Prep for Weight Loss 101 ebook.

And good news for experimental bakers: You can find demerara sugar at your local grocery store.

How demerara varies from other sugars.

Compared to white sugar, demerara is slightly less processed, and due to the nature of how it’s made, it also contains some molasses. “The molasses gives it trace amounts of vitamins and minerals and a slight toffee or caramel flavor,” notes registered dietitian Jenna Gorham, R.D., L.D.

However, in terms of the health differences between demerara and other sugars, the general consensus is that it’s no more or less good for you. “It’s important to remember that sugar in any form is still added sugar,” Gorham says. Notably, demerara and white sugar both have the same amount of calories and will cause a similar reaction when it comes to your glycemic index and blood sugar.

“It is recommended that Americans 2 years and older keep their intake of added sugars to less than 10% of their total daily calories,” notes Hultin of sugar in general. “Quantity and portions matter.”

It’s really in the texture that demerara differentiates itself as it is a larger-grain sugar than its counterparts. “In baking, you can use them all, but demerara is also more commonly used for a garnish because of its texture and large grain,” explains Hultin. Additionally, while white and brown sugar are softer, demerara is going to be a bit more coarse and better suited to sprinkle on top of recipes.

How to use demerara sugar.

As noted above, demerara sugar is particularly useful as a topping to baked goods due to its grainy texture, but the options don’t end there. “It can also be used in coffee or tea or in place of light brown sugar in any recipe,” adds Gorham. If you’re partial to a crunchier texture or a more buttery, robust flavor profile, demerara sugar may be a great choice for your recipe.

Looking to spice up your baking? Here are some of our favorite recipes featuring coconut sugar that could be swapped for a little demerara crunch:

Making a recipe that specifically calls for demerara sugar, but don’t have any on hand? You can use light brown sugar as a replacement. Likewise, if you’re out of brown sugar, you can swap in demerara without any significant impact on the end result (i.e., color or flavor).

“Consider light brown sugar as a substitute, or try turbinado or muscovado sugar, which have similar molasses flavoring and color,” adds Hultin. If you’re looking for that crunchy flavor to top your coffee with but are out of demerara, turbinado may be your best bet.

When it comes down to texture and flavor, demerara sugar is going to be a larger toffee-flavored option perfect for taking your baked goods to the next level with a light sprinkle overtop. Since it has a touch of molasses, it contains trace vitamins and minerals but not enough to make a meaningful contribution to the diet.

While demerara may have slightly more nutrients than other types of sugar, it’s important to be mindful of the quantity you’re consuming, in order to manage your blood sugar and overall health.

So, as with everything, enjoy your demerara in moderation—but it is an excellent way to diversify the flavor profile and texture of your baking.

Want to turn your passion for wellbeing into a fulfilling career? Become a Certified Health Coach! Learn more here.